Snakes on a Plane Wraps

by Jeff on March 27, 2006 in Entertainment, Uncategorized • 0 Comments
Share This 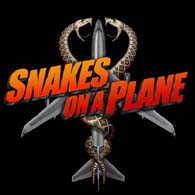 This is one of the most brilliant film titles in movie history. It’s become such a cult classic already that the movie studio had to keep the name “Snakes on a Plane” after fans found out it would be changed to some generic name. It has inspired blogs, t-shirts, songs and websites.

Snakesonablog.com has tons of information. Fans are so rabid, they even got the movie studio to re-shoot it with more gore, profanity, nudity and even specific lines of dialogue spoken by the star, Samuel L. Jackson referring to “snakes on a motherfucking plane!” Awesome.

Personally, I think they should also consider some of the suggestions for dialogue listed on this website.

Snakes on a plane, bitches!!!