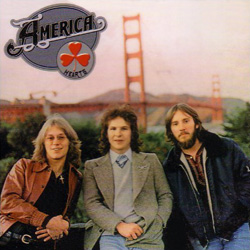 There’s something so comfortable about the soft sunny glow of 70’s acoustic guitar rock. Such is America and their hit, “Sister Golden Hair.”

Even the name evokes the image of a golden hippie girl in her sun dress with flowers in her hair. Led Zeppelin similarly mused in “Going to California,” allegedly basing their girl “with flowers in her hair” on Joni Mitchell. It was the ideal of a free and easy lifestyle on California’s sun-drenched coastline. America brought that to life with this light rock classic.

Despite their folksy sensibility and seemingly patriotic name, America was born in London. The three primary members, sons of American military fathers and British mothers, met in high school in England where their fathers were stationed.

They were oft criticized, even in their time, for their soft rock tendencies, but they delivered some huge hits including “Sister Golden Hair” and “Horse with No Name,” both of which reached #1 on the Billboard charts. They were so popular in fact, they attracted the attention of Beatles producer George Martin, who produced several of the band’s records including Hearts, the album that contained “Sister Golden Hair.”

What is so great about this song is how casually it treats something people today fight to preserve as sacred: marriage. The very first verse tells the story:

Well I tried to make it Sunday,
But I got so damn depressed,
That I set my sights on Monday,
And I got myself undressed.
I ain’t ready for the altar,
But I do agree there’s times,
That a woman still can be a friend of mine.

The premise here is that the singer stood up his girl at the altar (in reality or in metaphor), but still wants to continue seeing her.

It’s a classic 70’s theme much like “I’d Really Love to See You Tonight” and, of course, both sung from a man’s perspective.

The funny part is that it’s all very innocent. There isn’t the inherent seediness that you might find in something like this today. It’s not some hard core adversarial breakup. The singer honestly thinks this could be a beneficial arrangement for both of them. The guy says he loves her, so why not? This was the 70’s after all. If you weren’t getting your freak on at Studio 54, you were strung out on smack and listening to “Freebird.”

Hell, my Scooby Doo lunch box came with a hidden compartment for cocaine and I wore a silk shirt and brown corduroy pants every day in 3rd grade. What? I was pimp!