Business Not Ready for Social Networking…Yet

by Jeff on January 2, 2009 in Sorta Social Networks • 0 Comments
Share This 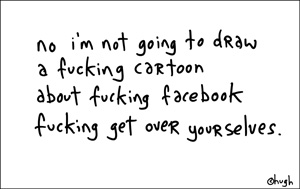 I’ve worked in web development for 8 years now and I spend a lot of time dorking around on social networking sites like Twitter, Facebook, Flickr and others. I find the idea of web 2.0 and social network as fascinating as I find people, which is to say a lot.

But, I have been dubious when confronted with the idea that business will soon become immersed in social networking to the degree that many proponents of those platforms suggest.

There is no question that many companies – particularly retail, technology and entertainment-driven enterprises – have found a comfy home nestled in the inviting bosom of sites like Facebook and MySpace. This is certainly a trend anyone would expect to continue, but I wouldn’t go as far as Louis Gray did in his predictions for 2009.

In the mid and late 1990s, there was a land rush for domain names, as every company jumped in and procured Web addresses and built out Web sites to establish their electronic home. Although many of these sites were rudimentary at best, they knew they needed to be there to participate. In 2009, it will be expected that brands and businesses will be similarly established on social media, using tools like Twitter, Facebook, LinkedIn, FriendFeed and YouTube.

I just can’t see most businesses making that switch in 2009 for a couple reasons:

First, we are in the midst of one of the worst recessions in recent memory. Companies may use social networks to expand their base to a degree, but participation requires someone manning the helm of that strategy. Most companies aren’t interested in adding people to handle those sorts of things at the moment and your average IT department is not only busy with the day to day operations of business technology (social networking needs a LOT of attention to be effective), many of them are still struggling to embrace web 2.0 for themselves.

Second, I’ve worked with companies big and small and the one thing they have in common is that they are slow to adopt ideas – much slower than the general public. This is partly because of the resources required to manage new concepts and partly because businesses that are successful are generally cautious of moving forward with new technology concepts. For every Twitter and Facebook, there are 20 failed experiments in web 2.0. Hell, many companies barely have more than a brochure website for a web presence and those that do often don’t venture further into the world of web than a CMS and RSS feed. If they are REALLY adventurous, they might assign someone to blog on their behalf.

I do think, however, that social networking is such a revolutionary and important concept in how we as a society interact that its influence on business is inevitable. Businesses that are ahead of the curve and really care about using social networking in the right way will do well to adopt and implement their own strategies sooner rather than later.

I’m just not sure most of them will do that this year, but, like Mr. Gray, I’m hopeful and I do think, just like websites, the vast majority will get there before too much longer.

← The Amish Fireplace
This Week in Spam →