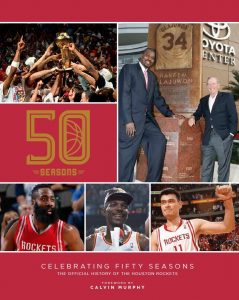 I started blogging in the early 2000s when that was barely even a thing. It comes mostly from my father, who was an English teacher and journalist. I went to J-school at the University of Houston, but immediately landed in other jobs that took me away from writing. The blog was that outlet until I found out someone would pay me for it.

Since 2008, my second job (I’m fond of saying I only take on hobbies that pay me) has been writing. I’ve been fortunate enough to write for a number of publications including the Houston Chronicle, the Houston Press, Houstonia Magazine, Texas Monthly, US Weekly and numerous custom publications.

In 2017, I was thrilled to co-author the official 50th anniversary book for the Houston Rockets. As a lifelong Rockets diehard, it was a bit of a dream come true. I’ve been fortunate to cover them and shoot and interview many of the players and staff over the years.

In addition to writing, I appear most Mondays on KUHF 88.7 FM during the Houston Matters show to talk sports. I am also a frequent guest contributor on Fox 26, commenting mostly on sports and technology.