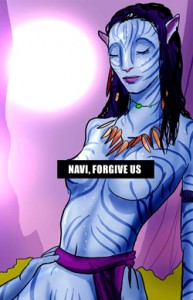 What was I talking about? Oh, right…

So, this woman got preggers while her husband was off fighting a war, you know, for our freedom and all. When he returned and just blatantly assumed she had been sleeping around on him, she explained that she had been impregnated by aliens satanists 3D porn. And, can you believe the guy was suspicious at first? Jeez, his wife waits for him while he’s off killing terrorists and when he returns home to find his wife had a black baby (did I mention they were both white? no?) all he can think is that she’s cheated on him. The NERVE!!!

Finally, he realized the truth.

US military man Erick Jhonson came home from a stint in Iraq to find that his wife was pregnant. Clearly he assumed she had an affair, but his wife Jennifer claims the “other man” was actually someone a little less physical.

It seems he actually buys her story, however. “I see it as suspicious. The films in 3D are very real. With today’s technology, anything is possible,” he said.

“Even though my husband believed in me, my marriage could be at risk,” Jennifer said. “But he knows I’m faithful.” It just shows you what joining the military does to your head.

Jennifer explained that “a month after watching the movie, I started feeling dizzy and the results were positive.”

SEE! How was she supposed to know that giant black penis on the screen was actually reaching into her vagina and filling her with babies? It happens ALL THE TIME! Just last week, I heard of a guy who had his kidney stolen at an IMAX movie. It’s called TECHNOLOGY, Erick!

By the way, if there is one thing I never want to see in my entire life, it’s a 3D penis, particularly on a giant screen. I don’t really want to see a 2D penis on a giant screen and 3D is like totally one worse than 2, which is, needless to say, terrifying. I thought the Human Centipede (I’m just telling you right now, do NOT click that link – you’ll thank me for that) freaked me out, and it totally does, but 3D penis seems much much worse. Although, having your mouth attached to someone’s butthole in the name of science is pretty bad too I guess.

← Let’s Do Some Dirty Dancing…In Your Pants
Dear Abby: She’s Back, Baby and by “Baby” I’m Speaking in Slang and Don’t Mean an Actual Infant, Which Would Be Weird →