Why All the Lady Hating? 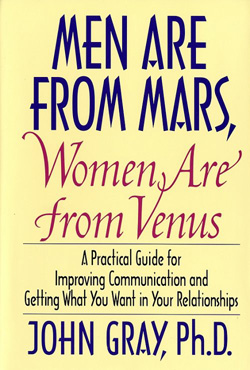 While I was out at lunch today (I had a lovely chicken sandwich if you must know), I tuned into the Jim Rome Show. I’m not a huge fan and I’m not remotely close to being a “clone” as he refers to his adoring listeners, but it’s generally entertaining and has a sports slant – worth a listen while driving around.

Rome decided to only let women callers through today and the hate mail and texts started pouring in. One guy said, “If I wanted to hear a woman squawk, he’s go home and listen to the wife.” Another chimed in about how Rome’s show was a safe haven away from his girl.

It should be noted that many of the callers on the Rome show are not all that interesting. The spend most of their time trying to hurl insults at fellow “clones” so that a select few will get invited to the annual “Smack Off.” Pretty stupid as a general rule, but occasionally entertaining.

For their part, the female callers were good. They talked a little sports. They took a few shots at male callers. Mostly, they were polite and competent – more than can be said for the average Rome caller. Rome’s personal take was in keeping with his personality. He admitted he loved spending time with his wife and even missed her when they were apart, consistent with what he has said about her on the show in the past.

All this got me to wondering: if women are so awful, why bother marrying them? Look, I totally understand wanting to have sex with women assuming you can roll your fat ass out of the lazy boy and wipe the chicken wing sauce off your face long enough to even attempt to pleasure one in the first place. But, if you really dislike being around them that much, why in God’s name would you marry one? What exactly is the point?

Maybe it’s social convention. Maybe it’s the fact that landing a woman might be the only shot you have at regular sex. Maybe you’re just a glutton for what you consider punishment.

Worst of all, maybe you want a kid. Seriously, if you hate the opposite gender enough to denigrate the one you chose to spend your miserable life with on a syndicated radio show – albeit anonymously – you do NOT need to breed. The last thing we need are little assholes running around with your disdain for the fairer sex.

Fortunately, I find this breed of “gentleman” rare, at least in my world. I, personally, happen to like hanging out with women. I count several among my dearest friends and consider them equally as close as my guy friends. My girlfriend is one of the most wonderful and fun people I’ve had the pleasure to meet. Like Rome, I really do enjoy her company and take every opportunity to avail myself of it.

Frankly, if I didn’t like a person, male or female, I just wouldn’t hang out with him/her. That doesn’t seem so difficult to me, but I guess the “clones” are too busy hosing down the decks with testosterone in an effort to impress other guys to think about it. Frankly, it sounds a little gay to me. Just sayin’.

← Prove Your Virginity! Get Certified!
Bachelorette Parties: Full of Fun and Tiaras →