When Did it Become Not Ok to Scream at Sporting Events?

by Jeff on March 2, 2006 in Sports Archive, Uncategorized • 0 Comments
Share This

I went to my second Rockets game in a week tonight. They are 1-1 with me in attendance, so I guess I’m just sort of whatever. Not anything like that no loss streak I has from 1993 through 1997.

But, what I found really odd at both games was not just the level of silence by fans, but the outright annoyance yelling caused people.

Last week, I’m at the Clippers game and there is a girl a few seats down calling Chris Kaman (see pic and you’ll understand) “SASQUATCH!!!” really loud when he shot freethrows. It was damn funny, actually… 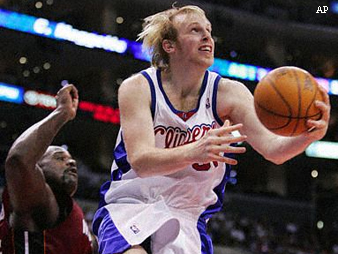 Anyway, everytime she yelled, she would apologize to fans around her. Most of them just laughed, but I found the fact that she felt the need to apologize just bizarre.

When you see a college game, the fans are absolutely NUTS for the entire game. This is the highest level of basketball and yelling is frowned upon???

It’s bad enough that Toyota Center is often more like a morgue than an arena with fans who shell out $200+ either not showing up or spending most of their time sipping drinks in one of the swanky club lounges. That makes for a great backdrop for TV – empty seats.

But, I could live with that if the fans who really do want to yell weren’t looked upon with sneers and laughs.

Tonight, I sat in a section the Rockets are trying to promote as the Red Rowdies – similar to Duke’s “Cameron Crazies” in honor of the Cameron Indoor Fieldhouse where they play.

There were probably 10 rows of just nutty fans screaming the entire game.

They did this for the first time at the Golden State game last week and even coach Jeff Van Gundy (a guy so disinterested in fans, it is only partially joked that he would be happier playing in an empty arena) left a voicemail for the promotions people saying how great that section sounded.

Our group tonight was most definitely louder and crazier. The commentators after the game gave kudos to the section for being so loud in an arena that doesn’t often have that. The opponents bench kept looking up at us and shaking their heads. The Rockets players obviously got some bounce from it.

There were some damn clever cheers too – screaming “ASHTON” at the Philadelphia 76er guard, Kyle Korver, who resembles the Punk’d star (see below): 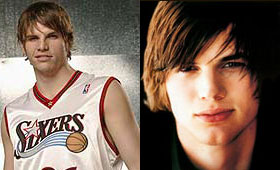 Other chants included “Who paid the refs?”, “Sixers suck!” and the standards like “Let’s go Rockets!” and “De-Fence!”

All in all, it was your standard sports stuff. I mean, at Aeros games, when the Aeros score, the entire crowd chants, “He shoots! He scores! Hey goalie, you suck!” and everyone seems to love it.

After the half, I came back from getting a pretzel (mmmmm…pretzel) and several people told us that a number of fans (and I use that term loosely) complained that we were too loud and that they were offended by some of our chants – specifically the “Sixers suck!”

I guess Rockets fans have become so used to going to games and sitting on their hands that they forgot that the point of going is to yell for the team. I understand if we were being really offensive shouting obscenities, but this was decidedly PG, not even PG-13, which allows “fuck” only once per movie. We didn’t come close to that.

This wouldn’t be so pathetic if it weren’t for the fact that everyone seemed interested in screaming and yelling for free t-shirts (when they were tossed to the audience) and for the stupid “crab races” that appear on the jumbotron.

Oh, sure, when you have a 1 in 1000 chance of getting a free piece of crap, scream all you want. But, the minute the team is back on the floor, you are dead silent.

What the hell is wrong with fans? If you are one of them, you might want to cover your eyes to not be offended – You suck!

← I Like Rednecks, Trailer Parks and Ropin’ Dogies!
Shows Coming This Weekend →