Use Your Big Boy Words 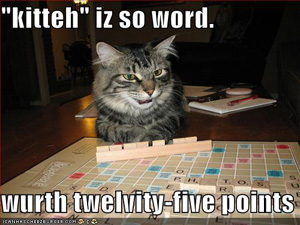 Language is our friend. It helps us to curse at people and say sarcastic things behind their backs. It gives us the ability to tell our children how much they’ve disappointed us and our partners that our love for them has grown dry like a cactus in the heart of the desert. See how poetic that is!

Language is so important, in fact, that people have formed groups to protect it. In the case of one town in Great Britain, they have run afoul of the Apostrophe Protection Society even though their decision to remove the vile punctuation mark from their street signs got the approval of both the Plain English Society and Plain Language Commission.

I’m sure your thinking, “Jesus, Jeff, what did the apostrophe ever do to you?” Well, I’ll tell you, that damn punctuation mark KILLED MY BROTHER!

Ok, that’s not true, but it sounds better than telling you the truth – I NEVER LEARNED HOW TO READ!

Anyway, with all these language societies and me being a giant word nerd, I thought it might be a good idea to tell you about some pertinent articles written by and talks given by language groups that may help you to better appreciate words and stuffs.

Freelipses: Leaving Your Reader Hanging While Setting Them Free

A is For Everything

A,B,C,D Eat My Shorts: How Fascist Conformists Force the Alphabet on Us All (by Alphabet City, the radical wing of the militant Spell Free or Die Society)

Semi-Colons Are Punctuation Marks Too; The Colon’s Sad Little Step Brother and Why He Needs You

Periods: A Man’s Guide to a Woman’s Punctuation Mark

The Dangling Participle and You

The Umlat – It’s Not Just for the Filthy, Filthy Germans

Being Past Perfect: You Had Thought You Knew Everything About This Tense

Who’s your buddy? Who’s your pal? I am. But really, I’m not. But language totally is! Remember that. Yeah, and don’t fear the reaper, which reminds me, why do blue oysters get their own cult? What the hell is so special about blue oysters anyway? I don’t even think they are real. Goddamn metal bands and their fancy spandex.

Anyway, now you have so new information so get out there and write. WRITE, YOU FOOLS!

← Mickey Rourke v. Chris Jerico in Houston???
The Boss Was Just Like Me, Only Talented and Cool →

2 Replies to “Use Your Big Boy Words”