Twitter is Like Talking: A General Waste of Time but Fun When Drunk or Quoting the Simpsons

by Jeff on September 22, 2009 in Sorta Social Networks • 3 Comments
Share This 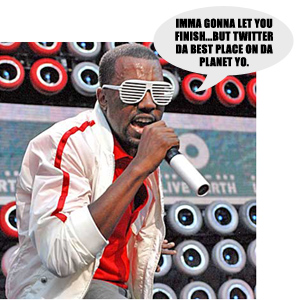 I Twitter a lot. This makes me either hilariously observant in less than 140 characters or an internet addict who won’t shut the hell up. I’m guessing it’s a bit of both. Truth is, Twitter is really no different from any other conversation you have in real life. It’s just broken up into convenient sound bites you can carry with you on your iPhone which, frankly, makes it more interesting than regular conversation.

Think about it. Some study said a few months ago that a huge percentage of Tweets are nonsense. Well, have you heard the average conversation out there lately? Try to make small talk with the lady behind you in the grocery store if you don’t believe me. I heard two people once discussing how hurricanes might be God’s way of killing people who drive our insurance rates up by living on the beach…and they were serious.

There was an episode of Seinfeld where Jerry said that something like 95 percent of the world was “UN-DATEABLE!” I think this is how it is with conversation. Most of it is just a waste of time – a way to get through the discomfort of telling someone you may or may not have impregnated their poodle with a turkey baster just to see if you could by yammering about something inane to distract them before saying, “Remember when I had that turkey baster and your poodle in the same room that one time and you wanted to know what I was doing?”

Think of all the “um’s” and “uh’s” and other such brilliant utterances we filter through our pie holes on a daily basis. Now, compare how much of that you see on Twitter. You might see some, but it’s completely for effect. For example, if someone posts, “Am I the only one on Twitter who likes to sacrifice babies to Satan?!? C’mon people!” You might respond with, “Um…er…wow” or, if you’re THAT way, “Uh, I kinda do…DM me!”

On Twitter, we get to the point, if by point you mean a continual barrage of jokes about Ryan Seacrest, deep discussion of who would make the hottest Baron Von Trapp in a modern day remake of Sound of Music and endless pictures of food, funny license plates, drunk people and that sort of awesomeness. And if the point of life isn’t me and Joey Guerra from the Chronicle making snarky comments during awards shows, I seriously don’t know what is (nerd shout out…HOLLA!). Look at a normal conversation I had recently:

Me: So, what’s up?
Friend: Nothing. You?
Me: Not much. Just hanging out.
Friend: Cool.
Me: What have you been up to?
Friend: Nothing really. Work, the usual. What about you?
Me: Um, you know, sacrificing babies to Satan. Same ol’.
Friend: Yeah, I hear ya.

Twitter Friend: Nvr rlzd Georgia O’Keefe statue lked like a vag.
Me: Yeah, it totally does, but everybody knows that. And you don’t have to do text speak on Twitter.
Twitter Friend: It kinda freaks me out.
Me: I can’t stop staring at it, but I do love a nice vagina.
Twitter Friend: That is awful! What kind of a weirdo are you? God, I wish you were never born.
Me: Mom, that’s TOTALLY not a cool thing to say even on Twitter!

See how much more interesting life is in 140 characters? So, suck it, Twitter haters. You don’t know what you are missing! If you need me, I’ll be talking about vaginas and ninjas on Twitter because I am awesome like that.

3 Replies to “Twitter is Like Talking: A General Waste of Time but Fun When Drunk or Quoting the Simpsons”