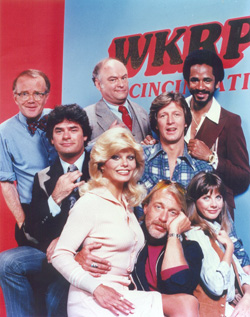 To this day, I still believe this line is the greatest response one liner in the history of television. That line comes from WKRP in Cincinnati, the hilarious CBS sitcom that ran from 1978 to 1982 and centered around the staff of an FM radio station.

The ensemble cast that spawned the careers of Howard Hessman and Loni Anderson was perfectly suited to their characters and the show was extremely funny, but I think I remember it fondly because my dad worked in radio when I was a kid and this station is very much like what I remember visiting as a child.

While the show only ran four seasons, it delivered numerous memorable plot lines and even some controversial subject matter including the trampling of fans at a Who concert, censorship of songs due to content and the bombing of a radio transmission tower. But, mostly it was a damn funny show.

Whether it was the stoned antics of Dr. Johnny Fever, the lecherous passes Herb Tarlic made at Jennifer Marlowe, the overstated seriousness of “serious newsman” Les Nessman or the simple innocence of Arthur Carlson, there was always something that generated at least a laugh or two for me – most especially the now famous Thanksgiving Day “Turkeys Away” episode (see below).

Central to the show was the music which, unfortunately, has not been preserved with DVD releases due to serious licensing issues. It’s a shame because it’s hard to imagine Les trying on his toupee without “Hot Blooded” playing in the background. What is even worse is that you can’t even see re-runs with the music in them because the licenses for the taped broadcasts expired about ten years after the show aired. As a result, the music on the DVD’s is generic substitutes with even dubbed in lines to replace the original titles.

I guess that means I’ll just have to remember them fondly without the support of modern technology.

There was an attempted comeback series called The New WKRP that, appropriately, failed in the early 90’s.

Gordon Jump had a long career in show business from recurring roles on Soap and The Partridge Family to a stint on Growing Pains and the role as the Maytag Repairman in commercials, Jump managed a long string of acting roles mainly on tv. He passed away in 2003 at the age of 71.

Howard Hessman is probably the most successful of the WKRP crew with his Dr. Johnny Fever character the most memorable of the series as well. He starred in the sitcom Head of the Class and had a recurring role in another 80’s-era sitcom, One Day at a Time. He has had bit roles in a ton of films and television shows. Prior to WKRP, he had a long career working as a comedic actor and currently has two films in production.

Gary Sandy had the sweetest wings of hair this side of Shaun Cassidy. His Andy Travis character was the biggest of his career though he did appear in numerous television shows and even had a small roll in the film The Insider with Al Pacino. In 2001, he returned to the world of soap operas where he got his start appearing in several episodes of The Young and the Restless. Most of his work since has been in musical theater.

Besides eventually becoming Mrs. Burt Reynolds, Loni Anderson carved out a niche for herself in a number of soap opera style made for tv movies some built from her own production company. Her Emmy-nominated role as Jennifer Marlowe is by far her most famous, however.

Tim Reid‘s very cool Venus Flytrap character was his most well known, but certainly did not keep him from slowing down in Hollywood. Besides numerous roles on tv shows like Simon & Simon, Sister Sister and That 70’s Show, Reid has worked as a producer, writer and director, mostly for television.

Richard Sanders made Les Nessman his bitch. I cannot imagine a more perfect casting for the sadly inept newsman. While Sanders hasn’t done a lot of work in front of the camera since WKRP, he has done voiceover work including television and video games.

Say what you want about Loni Anderson, Jan Smithers‘ Baily Quarters character was hotter. Period. Unfortunately, her post-WKRP career wasn’t so hot. She worked a handful of guest starring roles on television and ultimately left acting. She is probably best known as the ex-wife of film star James Brolin. Sadly, after the death of her father, Smithers ended up in the hospital when she was struck by a truck after her car broke down – she was naked at the time of the accident.

← Most of the Time, Air is Free
Really CNN? Complaining About Twitter? →

2 Replies to “Tubesday: WKRP in Cincinnati”