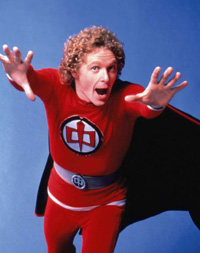 Like most boys, I was enamored with things like athletes, martial artists and, yes, comic book heroes. When The Greatest American Hero hit the airwaves, I was immediately hooked.

GAH ran from 1981-83 on ABC and starred William Katt, Robert Culp and Connie (John Tesh) Sellecca. The show creator was the prolific Stephen J. Cannell, who created other action-oriented 80’s shows like The A-Team, Hunter and 21 Jump Street.

GAH told the story of Katt, a school teacher, who discovers a suit from outer space that gives him super powers when he wears it. The only problem is he didn’t get the manual and learning to use his powers, which include flying, invisibility, super strength among other things, is a disaster, particularly the flying part. Think Jackie Chan in The Tuxedo.

On second thought, don’t think of that. In fact, just erase that from your memory. Whew. That was close.

Culp, a veteran tv actor most recently seen playing Ray Ramano’s father-in-law on Everybody Loves Raymond, is a tough FBI agent who is with Katt in the desert when they find the suit. The two are told by aliens via the car stereo to use the suit to save the world. This entails fighting bad guys and looking like total jackasses, apparently.

Katt played your typical late 70’s shaggy-haired sort-of hippie do gooder. He was a good guy who wore square knit ties and tried to teach his students, a bunch of at-risk kids led by Michael Pare, right and wrong, but he certainly isn’t cut out to be a hero. I wondered years later if Katt’s character was at all modeled on John Ritter’s character from the terrible movie Hero at Large, where Ritter, an out of work actor, accidentally foils a robbery wearing a superhero costume that looks an awful lot like the GAH costume and ends up fighting crime…badly. Katt and Ritter’s characters were pretty similar in personality and their names each had two t’s in them – coincidence?

See, this is what happens when you watch too much tv and have cable at an early age. You watch entirely too many television shows and bad movies. I have an entire list of B movies from that era I want to get on DVD. You don’t want to know.

GAH only made it a couple seasons before ABC pulled the plug. Ironically, the show’s theme song “Believe It or Not” went to #2 on the Billboard charts and stayed in the top 40 for 18 weeks, a much more successful run than the show itself, which must be incredibly rare. The theme song even got a nod on Seinfeld when George recorded used the theme for his answering machine greeting:

GAH hit in that perfect era of television viewing for me, the early 80’s. I was too young to care about girls (or do anything about it even if I did), but old enough to stay up past 8pm. Sweet!

To this day, I have really fond memories of GAH and, let’s face it, Connie Sellecca was HOT!

Wikipedia
IMDB
Get Yourself a GAH T-Shirt or, better yet, GET ME ONE!!! (XL please!)