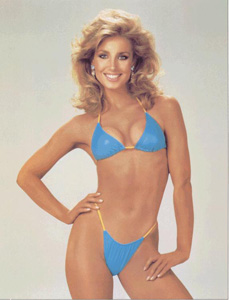 Lee Majors is not the kind to kiss and tell, but he’s been seen with Farrah. At least that’s what he sings to us in the intro song for the classic early 80’s action tv series, “The Fall Guy.”

Majors, already famous for both his husbandry to Farrah Fawcett and his stint as Steve Austin, the “Six Million Dollar Man,” returned to tv in the early 80’s to star as Colt Seavers, a stunt man and bounty hunter whose primary shtick was being under appreciated and driving a seriously huge truck.

The show revolved around Seavers, his partner, Howie Munson (Douglas Barr) and Jody Banks (Heather Thomas). What was amazing about the show is that they always seemed to have to catch some guy who skipped bail in someplace that looked a lot like the back lot of a Hollywood film studio, which was handy when they needed to use explosives or a ramp to leap that giant GMC truck over a moat or a bus or whatever.

Maybe the most memorable part of the show that ran from 1981 to 1986 was the theme song, “The Unknown Stuntman,” that Majors actually sung. Whoever had the bright idea that Majors could sing was wrong, but whatever. A friend of mine and I openly wondered if this and “Frasier” were the only shows where the star actually sung the theme. Let’s hope so.

One other notable 80’s actress, Markie Post, appeared on the show for three seasons including two that overlapped with her starring role on “Night Court.” Post and Thomas (pictured above in the poster that hung on my wall – I’m not kidding) rounded out a busty, blonde bevy of beauties on the show – you know you like that alliteration, so don’t deny it.

The show was created by Glen A. Larson, who was responsible for quite a few classic tv action shows like Battlestar Galactica, BJ and the Bear, Buck Rogers in the 25th Century (BSG light with Majors lookalike Gil Gerard), Quincy ME, Knight Rider and Magnum PI.

Where Are They Now

Lee Majors reprised his role as Steve Austin for a few made for tv movies, but has mostly lived off the fame of that role and his high profile marriage to Fawcett. He’s currently in production with a couple of films. My favorite cameo for Majors was as a North Pole commando protecting Santa in a fake film trailer in the movie Scrooged.

Douglas Barr reached his peak with “The Fall Guy,” but did manage a small part on the popular sitcom “Designing Women.” He gave up acting in the mid-90’s but still directs movies for TV and owns Hollywood and Vine Winery in Napa, California.

Like Barr, Heather Thomas peaked with “The Fall Guy” and only appeared in a few other minor films and tv shows until 1998 – most notably Zapped with Scott Baio and Willie Aames. Thomas was more than just a pretty face, however, penning some 40 screenplays selling one (School Slut – I wish I was kidding) to Touchstone Pictures though the film was never made. She recently became a published author with the release of her Hollywood scandal novel Trophies.

Markie Post went on to fame as Christine Sullivan in “Night Court” even showing up on an episode of “30 Rock” recently to perform a scene from the defunct sitcom. She’s had a few re-occurring tv roles including a short stint on “Scrubs” as well as a few big screen appearances in films like There’s Something About Mary and the ABC Family classic Holiday in Hancuffs.

2 Replies to “Tubesday: The Fall Guy”