Tubesday: The Facts of Life 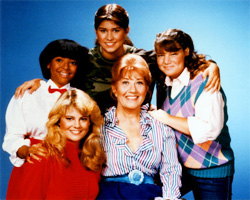 You take the good. You take the bad. You take them both and then, what do you have? The facts of life, silly! It seems only fitting that since I wrote about “Diff’rent Strokes” last week that I should give coverage to its main spinoff, “The Facts of Life,” this week.

When Charlotte Rae left “Diff’rent Strokes” after only a season-and-a-half, it was to take over as the house mother for a prestigious all-girls school and the result was a hit show on NBC that ran for nine seasons from 1979 through 1988.

The show centered around Rae’s Edna Garrett character and the girls she was charged with caring for. Think a high school sorority house with fewer keggers and a lot less nudity.

“The Facts of Life” was an ensemble cast that had a lot of members and spawned the careers of Molly Ringwald and George Clooney. There was an early guest appearance from a very young Helen Hunt as well. But, by season two, the show had found its life around the four characters that would take it the distance.

The show concept was based on the idea that Kimberly, the daughter from “Diff’rent Strokes,” was a student at a fancy schmancy girls school and needed Ms. Garrett to help them with a play. After doing a good job and helping a student with some personal problems, she was invited to stay on. After a first season with what seemed like a bazillion characters, the show was re-tooled and became the show most people remember.

As disappointing as it was to many an adolescent boy, this show was not about hot, mostly naked girls having pillow fights and learning about love though the very first episode did confront the topic of lesbianism, just not in a fun way. Like its parent show, “The Facts of Life” was a “lessons” show covering controversial issues including sex, drugs, alcohol and eating disorders among other things.

The show included a few controversies off camera as some of the girls gained weight and were placed on restricted diets while Mindy Cohn revealed that she was encouraged to remain chubby for her character. I guess we see where the eating disorder episode came from.

The show sustained its success over a number of years but began to slowly fade as the girls got older and finally cratered after the departure of Ms. Garrett when she married a man who was in Africa helping with the Peace Corps (of course!). She was replaced by Garrett’s sister, Beverly Ann Stickle played by the wonderful Cloris Leachman, but that was no help and the show folded soon after.

Charlotte Rae was a well-known stage actor before her move to the small screen. She has had re-occurring roles in “Sesame Street,” “Diff’rent Strokes,” and “ER.” Most recently, she had a fling with Adam Sandler’s character in You Don’t Mess with the Zohan. Rae will turn 83 in April.

Lisa Whelchel got her start as a Mouseketeer, but took a decidedly different path from fellow mouser Britney Spears. Whelchel, a devout and very conservative Christian, nixed an episode where her character Blair had sex, recorded a Christian pop album in 1984 that won a Grammy (yeah, she has a GRAMMY!) and left acting soon after “The Facts of Life” to focus on having a family. She has written several books on Christian motherhood and is a staunch advocate for home schooling.

Nancy McKeon, sister to Philip, who co-starred in another popular 80’s sitcom, “Alice,” is best known for her role as Jo on “The Facts of Life,” but she has continued to act since the show ended appearing in numerous made-for-tv movies and short-run shows. She declined to appear on the FOL reunion show and currently lives in Austin with her husband and two children having retired from acting and public life.

Mindy Cohn left Eastlake for some minor tv appearances before landing a job doing voiceover work for the show “What’s New Scooby Do?” The work garnered her a daytime Emmy award. She got a degree in sociology from Loyola Marymount in the mid-90’s and is a member of the board of directors for weSPARK, a cancer survivors organization. She has complained that none of the actors from FOL receive royalties from DVD sales or re-runs of the show.

Kim Fields put down her roller skates, but managed a fairly successful post-FOL career. She starred alongside Queen Latifa in the sitcom “Living Single” and has even had a career as a rapper. She currently performs under the name Blondielocks. In 2007, she had her first child with her finace.