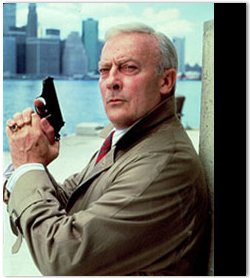 When you’re a kid who grows up liking kung fu movies, you tend to lean towards films and tv shows that are about avenging something or protecting those victimized by bullies. The underdog makes for a popular character in such instances and rarely was the underdog as lauded as in “The Equalizer.”

CBS ran the gritty series about a former agent of some sort from England named Robert McCall (Edward Woodward) who took on hoods, thieves, rapists and bad guys in general in 80’s New York City, a pretty scary place on its own. McCall took out an ad in the paper letting victims know that if they were in trouble they could call him and he’d handle it and handle it he most definitely did.

Woodward brought a suave ruthlessness to the McCall character. The whole show (from 1984-1989) seemed to revolve around his desire to right the wrongs of his past through a sort of vigilante justice.

“The Equalizer” featured several re-occurring characters including Mickey (Keith Szarabajka), a mercenary on loan from one of the government agencies McCall would occasionally assist, Control (Robert Lansing), the head of that agency, Jimmy (Mark Margolis), another of McCall’s support team, and a number of other characters that passed through the show with regularity – Scott (William “Sweep the Leg, Johnny” Zabka), McCall’s son and Lt. Isadore Smalls (Ron O’Neal), a frequently-annoyed police officer.

Besides the action, spy gadgetry and vengeance, the show featured some really fantastic backdrops on the gritty streets of New York and some rather darkly slick cinematography. Show creator, Michael Sloan, had a flair for the dramatic having worked on “Alfred Hitchcock Presents,” the short-lived ninja series that will definitely be an upcoming feature on Tubesday “The Master,” and “The Hardy Boys/Nancy Drew Mysteries.”

To further add to the cinematic feel of the show, “The Equalizer” was scored by former Police drummer Stewart Copeland. In 1988, the music from the show was released on an album called “The Equalizer and Other Cliffhangers.” Many of my drummer friends admired his ethnic percussion work and layered musical textures on this and his many other film scores and his solo work “The Rhythmatist.”

The show featured a large number of guest stars, many of whom had successful careers before and/or since. When Woodward had a heart attack during the making of the show, veteran actors like Richard Jordan and Robert Mitchum helped to pick up the slack. But, that only scratches the surface. Macaulay Culkin, Melissa Joan Hart, Christian Slater, Kevin Spacey, Vincent D’Onofrio, Lori Petty, Bradley Whitford, Laurence Fishburne, Jennifer Gray, William H. Macy, Chris Cooper, Cynthia Nixon, David Strathairn, Tony Shalhoub, Stanley Tucci and many others had guest starring appearances on the show.

I was a huge fan and watched it every week religiously. Just a year ago, re-runs began to air and I had it programmed in my DVR for a while. It was a very well made show and Woodward was outstanding as the haunted, kind but brutally calculating anti-hero.

Edward Woodward was a very successful actor in England and on Broadway prior to his stint as Robert McCall though the McCall character launched him to a wider audience in America and earned him several Emmy nominations and one Golden Globe win. He has steadily worked in film and on Broadway since “The Equalizer” went off the air including the voice of the Sultan in Aladdin. He recently joined the cast of the long-running BBC soap opera, “The East Enders.”

Keith Szarabajka has defined the role of working actor appearing as a guest star on countless television shows after “The Equalizer” and taking on bit parts in numerous films. His longest running stint on tv was on “Angel,” but he has worked on shows as diverse as “Law and Order,” “Babylon 5,” “Enterprise,” “Walker, Texas Ranger,” “ER,” “Crossing Jordan,” “Charmed” and “Unscripted.” His most notable recent appearance on the big screen was in The Dark Knight.

Robert Lansing passed away in 1994 after a long career as a character actor, particularly on television.