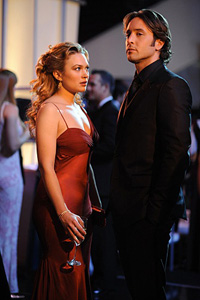 Since it is my birthday week, I picked a show from the last ten years that I enjoyed for this week’s Tubesday. In this case, a canceled show.

Sure, I could have gone with The Office, 30 Rock, The Daily Show or some other show I watched…and still watch…but the spirit of Tubesday for me is in shows that no longer exist and so I give you Moonlight.

What’s not to like about vampires? They hang out at night, live forever and have sex like rabbits. Sure, sunlight screws them up and they have to live off of blood, but it could be worse. Moonlight was like Underworld if it were written by Mickey Spillane.

Alex O’Loughlin plays Mick St. John, a vampire/private dick who got turned by Shannyn Sossamon’s character back when the dames had gams and everything was filmed in black and white. In present day, he plays a blood sucking do-gooder, who actually protects humans from vampires and crazy humans alike.

Unknown to her, Beth Turner (Sophia Myles), an investigative reporter at a TMZ-like tabloid news website, has been watched over by St. John since he rescued her from Coraline (Sossamon) and a burning house when she was a child.

Mick’s long time vampire friend Josef (Jason Dohring) helps Mick, but doesn’t get his love of humans. Josef is wealthy and more predatory, like your standard vampire cliche, only a little more Dana Carvey-esque in this case.

The show only managed one season before it got canned by CBS, which was a shame considering the underground popularity of the show and the great on-screen chemistry of the two hot leading characters (do a search for the shower scene for more info). Fortunately, the show concluded with the two of them finally hooking up despite their human-vampire shortcomings.

Mostly, I think this show was a victim of its rough time slot on Friday nights.

Aussie actor Alex O’Loughlin is still under contract for five more years with CBS (I guess they had high expectations for the show), but that hasn’t stopped him from working on upcoming films like Whiteout with fellow vampire, Kate Beckinsale, or dating model/”singer”/”actress” Holly Valance.

Sophia Myles, ironically, played a vampire in Underworld and in a tv version of Dracula. Her pale, blonde, hotness is sort of built for it. She also starred in Art School Confidential and Tristan + Isolde. She is working on a couple upcoming films including one in Germany. Myles is not just hot, she’s smart having been accepted to Cambridge to study philosophy.

Jason Dohring got his start in the critically acclaimed series Veronica Mars. He is working on a couple of upcoming projects for tv and film. Interestingly, he has two pairs of younger twin siblings – one set of brothers and one set of sisters.

Shannyn Sossamon has had starring roles in A Knight’s Tale and 40 Days and 40 Nights and has had roles in The Holiday and Kiss Kiss Bang Bang among others. She is set to star in an upcoming film and is rumored to be part of a new tv project as well.

One Reply to “Tubesday: Moonlight”