It should be noted that this particular Tubesday is a special one in honor of Bea Arthur who passed away over the weekend. 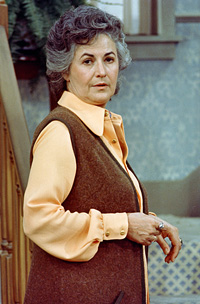 To me, there are three sitcoms that are the gold standard for live action American comedy television: I Love Lucy, All in the Family and Seinfeld. In the case of All in the Family, it spun off several successful shows including The Jeffersons and today’s selection, Maude.

The character of Maude was the cousin of Edith Bunker and played by the awesome Bea Arthur. The show, written by All in Family‘s creator Norman Lear, ran on CBS for six seasons and included some very memorable television and hilarious comedy, particularly when Archie Bunker made a visit.

The show centered around Arthur’s domineering, ultra-liberal character, her fourth husband, Walter (Bill Macy), and her buxom daughter, Carol (Adrienne Barbeau), all living under one roof in a New York suburb.

Like All in the Family, Maude touched on some controversial topics including liberal politics, race relations and abortion with Maude playing the foil to All in the Family‘s Archie Bunker, the polar opposite of Arthur’s character.

The topic of abortion, in particular, played a pivotal role in the series when in one episode, Maude was confronted by an unexpected pregnancy and decided to have an abortion two months prior to legalization of Roe v. Wade. Abortion was legal in New York state, but not in many places around the country where affiliates refused to air the extremely controversial episode (see video below).

In addition to Bunker, Maude would often get into clashes with her conservative neighbor played by Conrad Bain, who would go on to star in Diff’rent Strokes. Bain’s character’s wife was played by Rue McClanahan, with whom Arthur would later star in Golden Girls.

Another popular bit character was Florida (Esther Rolle), the maid, who Maude would often point to as an example of her liberalism, much to the annoyance of Florida. Florida’s role was so popular that her character was given her own show, the wildly popular Good Times, which was created by and based on the life of Mike Evans, the actor who portrayed Lionel Jefferson on The Jeffersons.

The show ended abruptly during its final season when, after a re-vamp of the show where Maude and Walter moved to Washington, D.C., Arthur called it quits.

Like all good sitcoms in the 70’s, it’s main character had a catch phrase, “God will get you for that, Walter,” which was, of course, DY-NO-MITE!

Bea Arthur found tv stardom again on the hit series, Golden Girls, in the 1980’s – a rare accomplishment. She won two Emmy awards, one for each of her two hit shows and was a long-time animal rights activist, often campaigning for PETA. In a stroke of pure kitsch, she “starred” in the often discussed but rarely seen Star Wars Christmas Special even singing a number on the show. Arthur died last weekend, just three weeks shy of her 87th birthday.

Maude marked the high point of Bill Macy’s fame in a long career as a character actor, but it did not stop him from performing relentlessly on tv and in film, appearing as recently as two years ago in the short-lived sitcom Back to You and in 2006 in the popular romantic comedy, The Holiday. Interestingly, he and his co-star, Bea Arthur, were born just five days apart from one another.

Adrienne Barbeau has had a very productive career since Maude went off the air appearing in films like Cannonball Run, Back to School and The Swamp Thing and tv shows like The Drew Carey Show. The busty actress is probably better known to most people who were around at the time for her famous poster, which became the cover of her autobiography, even though she was a very successful theater actor.

One Reply to “Tubesday: Maude”