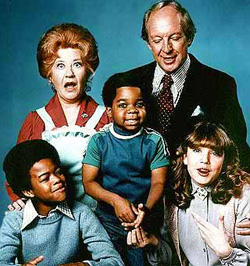 If there was one thing people loved in the late 70’s and early 80’s, it was little black kids. I mean, REALLY little and if they had chubby cheeks and a sassy disposition, they were destined to become stars.

The leader of the pack in the sassy, black, tiny kid genre was Gary Coleman who saw his star rise in the hit sitcom “Diff’rent Strokes.”

Here’s the premise. Some rich single white guy has a daughter but really wants some little black kids to match the decor in his home. He’s got a maid, but that isn’t enough, so he goes out and buys a couple of kids from Harlem and reads them bedtime stories about JJ Walker that are dy-no-MITE!

Ok, that’s not true. Well, part of it is. “Diff’rent Strokes” (yeah, they went with the Mark Twain slave language spelling) was a sitcom on NBC that ran from 1978 to 1985 and was wildly popular. It revolves around a rich family (a widow and his daughter) who adopt the two children of their long time maid who passed away. In fact, this family has a lot of maids – four during the course of the show if you count the dead one – even though it is not actually about the maid, which is kinda weird when you think about it. As you can imagine, hijinks and more lessons learned than all the ABC after school specials rolled into one.

Conrad Bain plays Philip Drummond, the wealthy widower who takes in kids almost as fast as he takes in maids. His daughter, Kimberly, is played by young soon-to-be-troubled actress Dana Plato. Todd Bridges plays Willis Jackson (yeah, they named the kids Jackson), the tough older brother. But, the star of the show is Gary Coleman’s Arnold character, a wise cracking, pudgy faced little kid even white people can love with, naturally, an adorable catch phrase, “What you talkin’ ’bout, Willis?”

As I mentioned, there are also many maids. First up (and best) Charlotte Rae who played Edna Garrett. Rae was only on the show a season and a half before taking over as the head mistress on the very popular spinoff “Facts of Life.” The remaining years of maid service were split between Nedra Volz as Adelaide Brubaker and Mary Jo Catlett as Pearl Gallagher. Like I said, lots of maids for the Park Avenue Drummonds.

Like most kids my age, I just thought the show was funny. Looking back, it was pretty silly and, frankly, more than a little uncomfortable to watch. Not surprisingly, the younger members of the “Diff’rent Strokes” family didn’t fare too well later in life, but the show lives on as a tribute to little black kids and their white families. Just ask Webster.

Gary Coleman was never able to grow beyond his role as Arnold Jackson or, for that matter, his cute kid status. He appeared in a number of bad movies during “Diff’rent Strokes” run and a couple thereafter, but nothing that could live up to the show. Like all the Drummond kids, Coleman had his share of run-ins with the law as well as legal and financial troubles. He even made an appearance on “Divorce Court.” He currently works for Simmons Media Group in Salt Lake City with a scheduled appearance on the what will undoubtedly be awesome reality show “Midgets vs. Mascots.”

Conrad Bain‘s most popular work, by far, was his role as Philip Drummond. The Canadian actor had a re-occurring role on the hilarious “All in the Family” spinoff “Maude,” but he is clearly most famous for “Diff’rent Strokes.” After the show went off the air, he only made a couple more TV appearances including one as Philip Drummond on “The Fresh Prince of Bel-Air. He will turn 90 next February.

Todd Bridges, like his fellow cast members, never truly found his footing after “Diff’rent Strokes.” He acted in a string of low budget films and, most recently, tried his hand at both producing and directing. Bridges suffered from a severe drug addiction and found himself facing many legal battles including an acquittal for attempted murder, one for assault and saw the charges dropped due to self defense on a stabbing wrap. Bridges has appeared on a number of celebrity reality shows.

The life of Dana Plato is a sad one. A once promising young actress who appeared as a guest star in many 70’s tv shows eventually landing a starring role on “Diff’rent Strokes,” she never seemed to recover from the celebrity lifestyle. Plato’s struggles with alcohol began at an early age. After “Diff’rent Strokes,” she was unable to land any promising roles and began working in B movies and posed for Playboy. She appeared in a couple of softcore pornographic films and even briefly came out as a lesbian before recanting saying she was drunk when the interview took place. She died at the age of 35 of an overdose of prescription medication, later ruled a suicide.