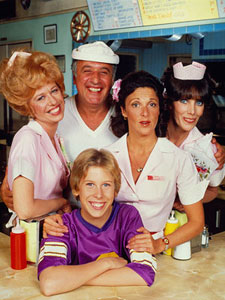 Television sitcoms have long been known for catch phrases and running gags. From “Pow! Right in the kisser!” to “NORM!” sitcoms have kept us repeating nonsense phrases for decades.

One of the most famous catch phrases in tv history was from the show “Alice,” which aired on CBS from 1976 to 1985. The sassy, truck stop waitress Flo spun, “Kiss my grits” into a career and, ultimately, her own show. But, she was just one of the wacky characters on this comedy set in a diner outside Phoenix.

“Alice” was based on the flim Alice Doesn’t Live Here Anymore and centered around Alice Hyatt (Linda Lavin), a widow who sets out to move to Los Angeles from New Jersey after the death of her husband. On her way, her car breaks down outside Phoenix and she and her son, Tommy (Philip McKeon), reluctantly settle in the area and Alice takes a job at Mel’s Diner on the outskirts of town.

Polly Holliday left the show in 1980 when CBS gave her a spinoff, “Flo” that only lasted two seasons. When Flo left Mel’s Diner, she was supposedly headed for her hometown of Houston, when she was sidetracked in Ft. Worth and opened a road house.

Holliday was replaced by Diane Ladd, who played the character of Flo in the film. After one season, Ladd was replaced by the third southern wise cracker, Celia Weston as Jolene Hunnicutt, who, despite not being nearly as well known, was on the show as long as Holliday.

I remember “Alice” as part of a Sunday night line-up of sitcoms for several years on CBS that seemed almost unbeatable. It included “All in the Family,” “The Jeffersons,” “Alice” and “One Day at a Time.” Add to the fact that Disney was on before all that and my Sunday nights were pretty well set as a kid.

While she may be best known for her role in this show, Linda Lavin has been an actor on both stage and screen since the 1960’s. She has been nominated for numerous awards for her stage work on Broadway and she won a Tony Award in 1987. She most recently appeared in a re-occurring role on The OC in 2005.

Vik Tayback was best known for his role as Mel Sharples, but he too had a long career in show business dating back to the late 1950’s including appearances on “Gunsmoke,” “Get Smart,” “Star Trek,” “Mission: Impossible” and “Bewitched” among many others. Tayback also played the role of Mel on in the flim. He passed away suddenly of a heart attack in 1990.

Philip McKeon‘s sister, Nancy, played Jo on “The Facts of Life” at the same time Philip was playing Tommy on “Alice.” Since “Alice,” McKeon has had very few acting roles and, like his sister, appears to have left public life.

Beth Howland worked early in her career as the Salem Cigarette Girl in commercials for the cigarette company. She later worked on broadway and in film before eventually landing the role on “Alice,” the biggest of her career. She worked only sparingly after the show went off the air and is currently married to actor Charles Kimbrough, best known for his role as Jim Dial on “Murphy Brown.”

Polly Holliday, like the other cast members of “Alice,” has worked in show biz for a long time. While best known as Flo, she has had appeared in numerous films including one of my all-time favorites All the President’s Men, Mrs. Doubtfire, Gremlins and, most recently, The Heartbreak Kid. She was nominated for an Emmy four times and a Golden Globe four times for her Flo character and picked up a Golden Globe win on two other occasions for the same role. She was also nominated for a Tony award.

← Finally, A Way to Wear Someone’s Skin Without the Muss and Fuss of Killing and Skinning Someone
Things I Overheard While Out on Easter →