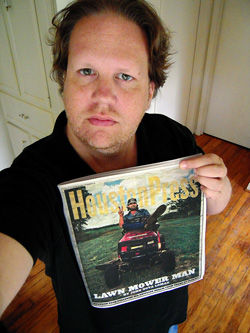 It’s been a while since I did one of these kinds of updates – you know the kind where I tell you what I’ve been doing, you doze off and then wake up after a dream where I stabbed you in the arm only it wasn’t a dream because I was really just upset that you – a good friend like YOU – would fall asleep reading my story. Really, it’s just shameful.

In the past month, I’ve spent a lot of time on the road. Some of it work. Some of it pleasure. That trend will continue going forward. First, let me just get the work part out of the way.

A couple weeks ago, I got a call from the Art Director at the Houston Press. I have taken photos for them in the past – mainly slide shows for the blog, but one or two shots for inside the paper as well. I was asked if I was available to do a shoot the following day (a Thursday) that might be used for the cover of the paper. It was explained to me that the photo would require some travel and that it might be a little odd.

I was also told that I’d be working with John Nova Lomax, a writer and person I respect a great deal, so I didn’t hesitate. Turns out, he and I drove deep into Cajun country in central Louisiana in search of a man named Kenneth Page who was determined to drive his riding lawn mower from his home in Waco to Florida.

John didn’t know exactly where Page would be because he didn’t carry a cell phone, but he believed that Page would travel on a few specific roads based on previous information and the fact that the roads were passable on a lawn mower. We spent hours driving and asking questions before finally finding him in Eunice. He spoke at length with John and the end result is a touching story about an odd gentleman with a strange dream.

I was fortunate enough to capture this man’s image for the paper. Page asked on numerous occasions if I was certain I wasn’t going to break my camera shooting him and laughed. He was a good-hearted guy with a ton of character in both his words and appearance. 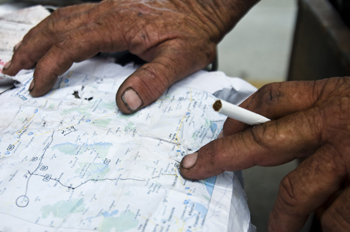 The trip with John was as much fun as the resolution. He and I talked about friends and music (he used to be the music editor for the Press and is still what I consider to be the best there has been at his position as I’ve written several times). We listened to Zydeco music and laughed about encounters with locals pointing us in the right direction. It was a long, really enjoyable day.

Most importantly, the photos did make the press and the cover shot is one of my favorites.

Speaking to fellow photogs out there, that shot could not have been more fortunate. I found a spot for us to shoot the photo that looked appropriate with a good background. The clouds really played nice and gave me a good sky. When I got the shot for the cover, I had done a couple quick test shots to get light and told him just to be comfortable. He kicked up his feet, flashed me the peace sign and the first shot I got was absolutely the best one I took, bar none. He never flashed the peace sign again. He never had the same expression. The lighting was never better. Pure luck, plain and simple.

The story John wrote is fantastic – worth the read for sure. There’s even a sidebar that includes the story of our trip to Louisiana, which is pretty cool as well. In addition to the cover story in the Houston Press, the Dallas Observer ran it in their actual paper and the South Florida Village Voice affiliate apparently put it in their blog, though I can’t find it at the moment.

You can even see a video with Mr. Page filmed by John here.

Overall, it was a great experience and I’m thrilled with the results. 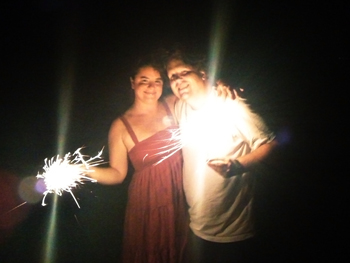 Ok, besides work, I’ve spent quite a bit of time at the beach. Weird for me, right?

Two weeks ago, C and I went to Port Aransas to stay at a lovely beach house belonging to the family of one of our friends. A group of us went and had an absolute blast from a 1am swim in the Gulf to much good food and silliness.

Fortunately for me, that scene would be repeated this past week. C and I rented a beach house in Surfside for the week – a really nice rental from BeachHouses.com (how did they get THAT domain name???) that we found when we randomly went to Surfside for the day several months ago. We were there for a few days just the two of us relaxing, swimming, reading and eating good food. By the end of the first day, we were like overcooked noodles, so intensely relaxed and de-stressed.

Despite the rain from a lovely tropical depression, we got in much beach time (C even managed quite the nasty burn, though she handed it with typical ease) and thoroughly enjoyed ourselves.

By the weekend, the weather had gone from ugly to positively perfect and friends joined us. We ate way too much good food, relaxed on the beach and laughed ourselves silly. It was, in short, a fantastic experience. From bonfires and sparklers to wave riding and drunken sing-a-longs, it was just about the most perfect vacation ever.

Even the thought of having to get back to the regular work-a-day world of home didn’t dampen my spirits, especially since we concluded our week on the patio at Maria Selma, soothing ourselves with margaritas and Tex Mex.

In the next few weeks, I’m going to spend some more time shooting photos and hanging outdoors. I’ll be traveling to College Station to shoot a food event for Robb Walsh on Wednesday and going up to the Guadalupe River at least once in the next few weeks to enjoy more time on the water.

In the midst of all of these things, I’ve shot two weddings and done an engagement shoot. Plus, the band is back and gigging again.

If nothing else, this summer has been eventful!

← Man Dies, but Twilight is AWESOME!
I Am Literally No Closer to Knowing What This Means →