Today Was Just a Strange Day

by Jeff on January 6, 2007 in Life, Me Griping, Uncategorized • 0 Comments
Share This

The day started innocently enough.Â  K and I had plans to go to the Yale Street Market to see Elaine and Christine’s Fresh Photography booth.Â  After that, it was off to the Cat Show at the George R. Brown Convention Center and maybe a stop at the Bridal Extravaganza so K could scope out the photographers’ booths since she may be interested in getting one herself.

All seemed normal.Â  We went by the Yale Street Market.Â  Nothing out of the ordinary.Â  But, then, the cat show.

First off, it was smaller than we expected.Â  Nothing wrong with that, but I think our expectations were high given the fun we had at the dog show this past summer.Â  It was sparsely populated and not terribly well organized.Â  The adopted pets were all the way in the back right corner away from all the action, which bugged me quite a bit.Â  If you REALLY want to help them out, put them right by the entrance/exit.Â  It isn’t as if you were hurting for space!

Anyway, we began to walk around and checked out one of the judgings when a woman came by with a lovely himalayan on sort of a platter.Â  She basically shoved it right up to a number of the onlookers, us included.Â  I stuck out my hand so the kitty could sniff me.Â  Let me just say right off that if you shove a cat in my face, I’m going to, at the very least, allow it to smell my cats.Â  I’d like to pet it, but I wouldn’t do it without asking.

As I reach forward with the back of my hand to the cat VERY slowly, the woman draws the cat back and says, “Oh, NO!Â  You weren’t up with me at 3am this morning grooming her.”

WTF?Â  You’re right.Â  I wasn’t because I’m not insane.Â  That just ruined the whole mood and after a walk by the pet rescue booths, we were gone.Â  Bummer.Â  All of the cats were in cages anyway making for no photo ops.

At this point, we decided to skip out on the Bridal thing until Sunday and move on to lunch.Â  We drove over to my favorite Chinese restaurant, Tien Ren.Â  It is completely vegetarian and everyone I’ve ever taken there – meat eaters or otherwise – absolutely love the food.Â  It is fantastic.Â  We pull up and there’s a big sign on the window…uh oh.

You know, that will be in my next post, so I won’t spoil it here.Â  Suffice it to say, much suckage ensued but we did eat.

After that, it was on to see a movie.Â  We saw The Holiday, which was actually quite entertaining.Â  We joked that after the day we had we half expected to get the alternate ending where Cameron Diaz and Kate Winslet’s plane crash head on into each other on their way back from their separate vacations.Â  Fortunately, we got the happy ending.

One rather perplexing thing about the cinema (the Studio 30 on Dunvale) was this video game: 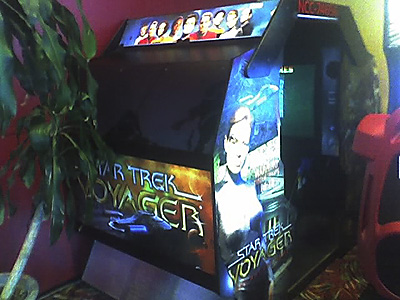 A Star Trek: Voyager video game?Â  Very strange considering the show ended in 2001.Â  With the giant shot of Jeri Ryan as half-Borg-half-human Seven of Nine on the side in her skin tight shiny suit, maybe it was trying to promote her new show, Shark, with James Woods.Â  Maybe not.

I’ll admit that I watched Voyager and liked it.Â  Yeah, I’m a nerd.Â  But, a video game?Â  Hmmm…

The other bummer was that we had like 40 minutes before the movie and I thought a video game might be fun since I had a pocket full of quarters.Â  The one game I really wanted to play (Galaga – my all time favorite) was the ONLY game occupied for the entire 30 minutes we were waiting.Â  Not kidding.Â  On top of that, I put $3.50 into a drink machine to get a bottled water only to find after the money was in there that the machine was out.Â  Are you kidding me?

At least the change return worked and I goit my money back…in quarters I couldn’t spend on video games.

Very, very frustrating day.Â  I hope tomorrow will be better!