Tired of Looking at Your Dog’s Butthole? Me too! 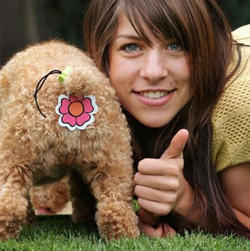 Inventions are a funny thing. On one hand, the microchip has revolutionized the way we communicate and live our lives. On the other hand, the snuggie has replaced the blanket with shame. So, you know, six and one half dozen.

Well, in the same spirit as other great inventions like the light bulb, the cure for polio and the bumpit comes the Rear Gear, essentially a colored piece of cardboard with a string to cover up your dog’s pooper.

Is your pet feeling left in the dirt because of his/her unsightly rear? I’ve got them covered… Rear Gear is handmade in Portland, OR and offers a cheerful solution to be-rid your favorite pet’s un-manicured back side.

Rear Gear comes in many designs including a disco ball, air freshener, heart, flower, biohazard, smiley face, number one ribbon, cupcake, sheriff’s badge, dice, and you can even make yours custom, so there’s a Rear Gear for everyone.

Leave it to the artists at Etsy, purveyors of anything that can be crocheted, knitted or needlepointed, to come up with something this brilliant. It’s like a robot except it’s really just an asshole-shaped piece of cardboard, so it’s really not at all like a robot, unless you have a robot made of cardboard and shaped like an asshole, which, when you think about it, is pretty awesome.

I’m going to guess the Rear Gear doesn’t come equipped with a microchip, so it won’t do anything cool like take over the world or mimic fart sounds or warn you when your pup actually cuts one. Speaking of which, I can immediately think of a modification to this work of genius – scent! Besides covering up the actual anus, it could turn your dogs poots into rose-smelling poop and who doesn’t love that?

If I were you, and I’m not THANK GOD (no offense, but you’re totally weird, yo), I would get about 30 of these for the holidays and give them as gifts to your friends and family members. If they have dogs, great. If not, include a stapler or thumbtack and suggest they might need them for “personal use.” Everyone will laugh, except the person getting the gift. They’ll be scarred for life and probably stab you in your sleep. It’s the gift that keeps on giving!

But, don’t put the Rear Gear on my Christmas list. I have cats and they would claw me to death at the mere sight of something like this. Oh, and my farts smell like fresh laundry and love. Instead, I’ll take 1 million dollars, ninja training and world peace. Thanks in advance!

One Reply to “Tired of Looking at Your Dog’s Butthole? Me too!”