by Jeff on November 8, 2005 in Sports Archive, Uncategorized • 0 Comments
Share This

What you are about to see is a feel-good story. It’s a story that proves professional sports can contribute more to society than just a game.

What’s more, it is a story that shows that if you are a very good television executive, eat your vegetables and say your prayers, something like this may just happen for you during sweeps week.

Two Carolina Panthers cheerleaders who allegedly were having sex with each other in a bathroom stall at a Tampa, Fla., nightclub were arrested and charged early Sunday following a run-in with patrons and police.

According to a police report obtained by the Charlotte Observer, 22-year-old Kristen Lanier Owen and 26-year-old Angela Ellen Keathley were arrested following an incident at Banana Joe’s, in Tampa’s Channelside district, at 2:10 a.m. ET.

The police report claims Owen and Keathley were having sex with each other in a stall when other patrons grew angry that the two were taking so long in the bathroom.

Owen and another person began arguing and Owen hit that person in the face, according to the report. Keathley, who was escorted from the nightclub, was so drunk she could barely stand, the report said. Police described Keathley as rude and belligerent with police…

According to the Panthers’ official team Web site on NFL.com, Keathley is a registered nurse and second-year member of the TopCats. Owen is listed as a student at the University of North Carolina-Charlotte and first-year member of the cheerleading squad.

Two cheerleaders who are a nurse and a co-ed in real life had sex in a bathroom that led to a catfight with other female bar patrons.

Oh, and if you were curious, here’s what they look like: 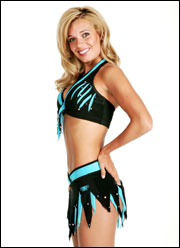 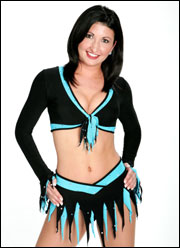 When I wake up in the morning and read something like this, well, let’s just say I feel as though the world has done me a favor.

← Music, Pictures and Utter Impoliteness
Light at the End of the Tunnel →