The Most Romantic Gift Ever: Blow Guard

I wish I was smart enough to come up with some of the crap people think up on a daily basis. Honestly, the Foreman Grill, the Flowbee, the human heart and now the Blow Guard.

I’m sure it’s very useful, but I have some questions about the ad: 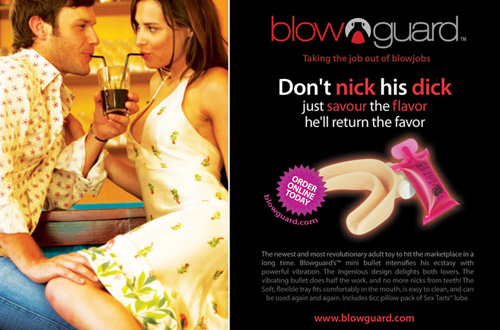 First of all, isn’t Nick the Dick that guy with the foot-long schlong in Bachelor Party? I’m fairly certain it is. Aren’t they going to be sued for using his name without permission?

Second, why are they using the British spelling of “savour” and not “flavor?” Are they using some quasi-British-American hybrid language because, if so, I say, “Go back to Russia!” This is AMERICA. In America, you talk American and not some commie pinko half-breed language.

Third, how do you KNOW he’ll return the favour favor? Does the Blow Guard contain some magic serum that enters the bloodstream through the penis and causes a man to be unable to stop himself from performing oral sex on a woman or does it just mean he’ll tap you on the head this time before having his happy ending? Either way, I guess that’s an improvement for most women.

Lastly, what in the name of all that’s holy is that couple drinking? Sweet pink Jesus that looks nasty.

4 Replies to “The Most Romantic Gift Ever: Blow Guard”