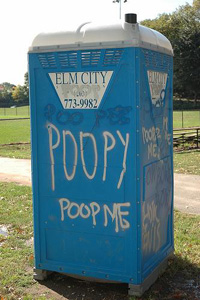 I’m not going to lie. This is going to get weird.

When I was in Austin on Saturday evening, I noticed the lack of decent restroom facilities along 6th Street. Sure, you could go into venues, but that was only if you had a wristband, knew the secret handshake or agreed to buy their discounted $40 beer. Fortunately for me, I only urinate when I’m angry.

At one point, I decided to take a breather and found a spot right behind the Texas Lottery building where there was an atrium and a nice table and chairs. I was the only genius who managed to find this place, so it was quiet and I got to chill for an hour.

I was chatting on the phone with a friend and describing the locale, which I said would make a good place to pee if you were a guy in a pinch. Mind you, I would NEVER do this more than three times in the same day, but the discussion continued on to the inevitable – would I defecate in this location as well?

Fact is, guys are kinda gross. We know this. As another female friend told me after washing her hands in the guys’ bathroom at a restaurant, “Boys are gross. Your bathrooms smell funny.” We know this. We don’t care. But, most guys are a little freaked out by public deuce dropping and not just the squatting in the park variety. Guys aren’t even real fond of having to sit in a stall. We are proud of our ability to pee standing up and we prefer to keep our other bodily evacuations to ourselves and the privacy of a bathroom well stocked with magazines, books and a television – what, you don’t have that?

Anyway, here is the poll and I even divided it so that we can get a clear reading of both the men and the women on this one.

It should be noted that I would do neither in public because, well, I’m sane and not a hillbilly, but have fun voting!

Oh, and EXPLAIN YOURSELVES in comments.