The Boss Was Just Like Me, Only Talented and Cool 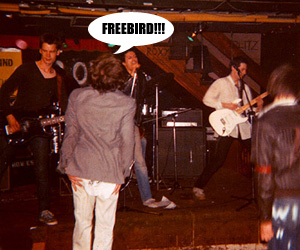 Yesterday, Bruce Springsteen played the halftime show of the Super Bowl. Even for him, this was probably the biggest audience he’ll ever play for if you include all the millions of people watching on television.

After much debate online about the songs he would do, he opened and closed with surprises – 10th Avenue Freeze Out and Glory Days – while managing to be unfortunately corny with a joke about delay of game and a fake referee coming onstage to flag the E Street Band. Minus that bit of Vegas schmaltz, Bruce was outstanding as usual.

However, it wasn’t ALWAYS like this. Check this story from the University of Massachusetts Amherst.

A few days before the event, the concert committee learned that the Elvin Bishop band had split up. Luckily, they had a replacement, someone they described as â€œa breaking talent.â€

At 1 P.M. on June 5, to no fanfare, a young Bruce Springsteen and his band took the stage.

â€œThe band was actually pretty good so I took some photos,â€ writes Jim Laford â€™76. â€œAt the time there was hardly anyone there so I just walked to the front of the stage and snapped away.â€

â€œBecause they were unknown, you can see from one photo that students just walked by the front of the stage with little notice. Not until a few years went by did I realize who that opening band was.â€

Check the link to see actual photos from the show. It’s CLASSIC!

For anyone who has ever played to no one or to a crowd that just doesn’t care – more than often the norm for unsigned bands – you know that feeling. You are up there just killing, end the song with a massive THWOMP and…and…nothing.

The best (or worst depending on your perspective) experience like this for me happened last year when the band was in New York playing at Arlene’s Grocery, a very cool lower east side indie rock bar. It was a Sunday night and sparsely populated – not a shock for some unknown band from Texas.

We played a really energetic set to decent applause from the tiny crowd. On our last song, we were just rocking along and got to the end holding out the last chord while George said, “Thank you, New York. We’ll see you next time.” BANG! Ending.

Nada. Not a single clap.

The bar had closed while we were in the middle of the last song, but didn’t mention to us that it was closing time and the stage lights were so bright, we couldn’t really see out into the club to know everyone had left.

Talk about humbling. Nice to know that even the guy that just played for millions of people and whose new album will drop at #1 suffered the same humiliation in this case at the hands of uninterested UMass students.