The Bolivian Road of Death

by Jeff on November 14, 2006 in Blogtastic, Just Plain Weird, Uncategorized • 0 Comments
Share This 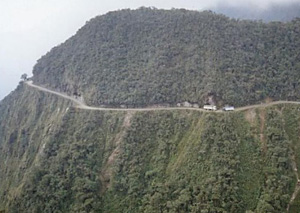 I tell you this with all honesty and sincerity in my heart. If I were ever forced to travel this road, you would not have to shove my lifeless corpse over the edge for me to die for I fully believe my heart would burst in fear.

This is a mountain road in Bolivia or what I like to call The Bolivian Road of Death.

26 vehicles [sic] fall off the road per year. About 200 people annually lose their lives here. A fatal accident every fortnight is not uncommon on the Coroico road (the July disaster brought the death toll during the previous eight months to 55 and in 1995 the Inter-American Development Bank declared this, the world’s most dangerous road.

The only road that exists to get to the Amazon from La Paz, it is carved into the sides of a canyon. It can have vertical drops for 1,600 feet and has no guardrails.Â  Consequently, most Bolivians take the time to pray before their descent. After all, it could be their last.

There are more pictures via the link above.Â  And I thought driving along the PCH in California was scary.

← Spilled Chickens Important, Dead Guy Not So Much
Finding the Customer Service Number →

0 Replies to “The Bolivian Road of Death”