The Backlash Against Expertise or Gear Won’t Solve Your Problem, But It Might Help You Not Suck So Much 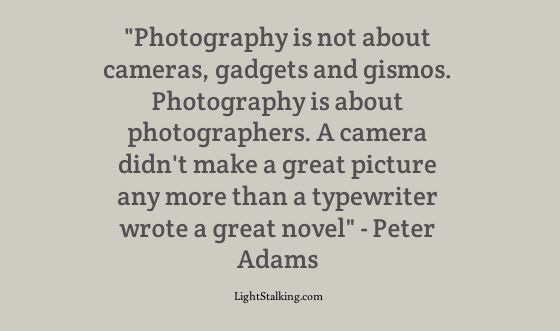 I know, it’s been a while, but the truth is I didn’t want to write a long rant on Facebook and this seems the best place for it, even if it is so long abandoned it feels like a ghost town. Woooooooooo…

This image was posted on Facebook today by a photography group called Light Stalking. It was reposted by a friend and I added a couple of comments. It dovetails nicely into an argument I’ve had with people for the last five to ten years about the suspicion and even outright disdain many show for experts. I’ve noticed it a lot in music and photography, but it is clearly visible in science, for example, as well. The recent gaffe by Todd Akin would be a good example.

For the purposes of this particular post, I’m going to focus on photography and the idea that it isn’t the gear that makes a photographer good, but the skill of the photographer and I agree in the most simplistic sense that the logic is accurate. There is no more annoying comment to a photographer than, “That’s a beautiful photo. You must have a nice camera.” Um, yeah, dipshit, that’s what it was. It had nothing to do with my abilities, just a really expensive camera.

It reminded me of a gig years ago. After I got done playing, another musician approached me impressed with the sound of my bass. She and another person had been debating what made it sound so good. They speculated I tuned it differently or that the bass and/or amp were very expensive, none of which was true and, when I told them this, they just shrugged and said, “Yeah, we couldn’t figure it out.” I guess it’s not possible that it was THE MOTHERFUCKER PLAYING THE BASS.

My only concern with the logic in the graphic is the implication that anyone with an iPhone can be Ansel Adams. It is true that great photos can be taken with very inexpensive and technologically inferior equipment. People have been doing it for decades. There were wondrous images embossed on tin types from the 1800s that were taken with something akin to a magnifying glass attached to a cardboard box.

However, as I pointed out in the post on Facebook, NASA astronauts traveled to the moon using technology not even powerful enough to power a decent calculator today, but it doesn’t mean they would pass on using modern technology now simply because they COULD do without.

The essence of being great at anything is the ability to combine real talent with creativity, intelligence, work ethic and the right tools for the job. The best athletes to ever play sports had serious talent, competitive drive like few others, incredible awareness on the court or field and constantly evolving creativity. But, they were also blessed with real, God-given machinery in the form of musculature and reflexes that the vast majority of us simply don’t have. Their equipment was vastly superior and they spent their lives learning how to master the use of it.

In photography, the best of the best not only take great shots, they know how to replicate them and how to react quickly to changing environments. And, yes, they could probably take a substantially better photo with an iPhone than a novice could with a $3000 camera, but pros don’t show up at photo shoots with point-and-shoot cameras because they want to be able to have every tool at their disposal. You COULD build a house with a hammer and hand saw, but why wouldn’t you use power tools if they were available to you?

I guess this sort of thing tweaks me because I know how much time and effort and money is put into being great at something and it is often overlooked because technology has expanded so dramatically in the last decade. Virtually anyone can make music or shoot photos or create logos or manage a sports team using modern technology, but it doesn’t mean they can do those things well.

And even if someone produces a stunning work of art with a mobile phone, that doesn’t make him/her a great artist. A great artist could do it again and again and again. To reference sports again, it isn’t a single great performance that defines and athlete. It is the ability to duplicate and even improve on that performance over and over and over again. Photographers are no different.

This is not to discourage anyone from following their creative instincts. In fact, just the opposite. If you like to take pictures, GREAT! Welcome to the club. But bear in mind that while gear isn’t the be-all-end-all of photography, it is an essential aspect of growing both as a skilled technician and an artist. Very few true artists are able to do what they do without the benefit of good gear. Maybe you are one of those exceptions, but it is more likely your best bet is to get some good equipment and learn how to use it.

It won’t necessarily make you great, but it will make it tougher to suck.

← Thanks to Chris Gray, the Houston Press, My Dad, Music and More
Dear Abby: EW! MY MOM IS HAVING A LINGERIE SHOWER! →

One Reply to “The Backlash Against Expertise or Gear Won’t Solve Your Problem, But It Might Help You Not Suck So Much”