by Jeff on November 17, 2006 in Stuffs for Eatin' Archive, Things You Buy for $100 Archive, Uncategorized • 0 Comments
Share This 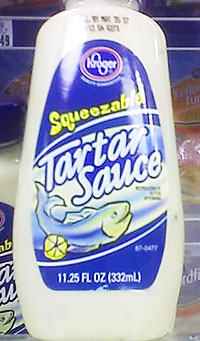 I was back at my local neighborhood Kroger again today picking up a few food items. I do this when I want to eat…you know, buy groceries.

Recently, I began eating fish again for a variety of reasons that I won’t bother to go into here. In keeping with that change of heart, I decided to stop by the meat area of the store.

As a kid, I was a fish stick eater. I mean, who isn’t? Those damn things are good all battery and fish-like. So, I swung by the freezer area to see what the Gorton’s Fisherman had worked up for me.

Hanging on the outside of the freezer window was this…whatever this is to the right. Now, I’ve used squeezable mayonaise before. It’s handy for picnics, road trips and pure laziness. But, for some reason, it felt very unholy to rest my eyes on a tube of squeezable tartar sauce.

I should say that I’m not a big fan of tartar on the whole. It’s not bad, but I don’t really use it. Never have.

Seeing it in this plastic container and imagining it oozing out of the tiny hole in the cap did nothing for my taste in tartar, I can tell you that. And, is it just me, or is the picture of the happy smiling fish on the front a little disturbing? Really, would a fish be smiling knowing one of his buddies (or he, himself) were about to go down the throat of some human covered in a squeezable sauce? I think not.

← Online Karaoke: Beat It!
Glad Not to Have a Daugher in Private School →