Sorting Out the Whole Kroger Situation 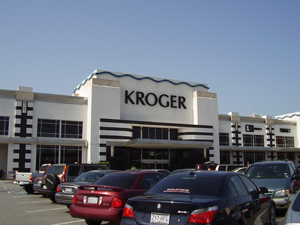 I’ve been seeing a lot of you ask on Twitter, “Where the hell is Zombie Kroger and why is it called that?” By “a lot,” I mean like three people I sorta know but have never met.

So, I figured I should put together this little rundown of the four Krogers that have been given monikers and why they are so named.

The original. I don’t know when people started calling it Disco Kroger. I first started going there when I worked across the street. I also had my truck towed from there when I stupidly parked in its parking lot during a show at Tower Theater (you know it now as Hollywood Video – sigh). But, if you’ve ever been in there later at night, particularly on the weekends, you understand just how it got its name.

As far as I know, I’m the one that handed this Signature store with the name dating back to this post about how crappy that store can be. I first started going to Ghetto Kroger when it was decidedly less ghetto many MANY years ago. It was also significantly smaller. I’m told this will be the largest Kroger store in the US when re-modeling is complete. To understand its ghetto nature, all you have to do is go in there, see the construction and note ZERO signs saying “Please excuse our mess” or anything like that. I guess in a few months, we’ll have more ghetto to love.

As outlined here, Zombie Kroger is so named because it is marked both by really sweet, exceedingly slow elderly people and a dearth of checkers most of the time. Plus, it seems to be in some sort of vortex that swallows normal time and has soda that looks like Windex.

Only recently this River Oaks store (pictured) got its name for both its clientele and the fact that you feel as if you are walking on diamond-encrusted floors and breathing caviar-infused air as you mill about in this hoity toity market. I see a blog post in my future.

So far, those are the Krogers with nicknames. I’m sure others could be determined if necessary. Hell, add your own if you like!

← That Sucking Sound You Hear is Ticketmaster Stealing My Money
Twitter is Like Talking: A General Waste of Time but Fun When Drunk or Quoting the Simpsons →

27 Replies to “Sorting Out the Whole Kroger Situation”