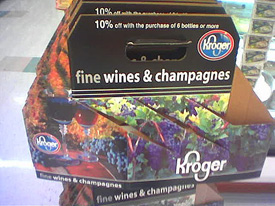 I did it. I got lazy. I wanted a snack and the Kroger is just 3 blocks from my house. I had been avoiding it except for household goods – paper towels, detergent, etc – and even going to Target for those whenever possible.

Last night, I decided it was a Kroger night because I didn’t feel like going to Randall’s or anywhere else and my visit helped remind me why I don’t care for the ghetto version of Kroger that is near me.

The stink of garbage outside the store.
I’ve been going to this Kroger for a long time. In fact, I used to go to this store as a kid with my grandparents. But, since it became a “Super” Kroger or whatever they call it when the old, quaint store is swallowed by the Godzilla of grocery stores, the garbage outside the front door of the place has stunk like Mothra’s asshole.

The woman at the courtesy booth who didn’t speak to me.
I still had some rolled coins left over from my yard sale, so I took in a couple rolls to cash out. I didn’t want to be the dumb ass who tried to check out with a roll of dimes, so I went to the courtesy booth. The woman behind the counter just stared at me when I asked her if I could get bills for the rolls of coins before walking into the back office for a couple minutes. These were still wrapped from the bank. She came back out and, without speaking, called the manager via the intercom and began to help another customer without saying a word. When I asked, she said that they sometimes have to count the coins. The manager showed up and approved the transaction. She looked at the two rolls of dimes and one roll of quarters and asked, “Twenty dollars, right?” Jeez, I dunno, Rockefeller, you’re the cashier.

The choice selection of baked goods.
I don’t go into a grocery store expecting it to be like a German bakery, but it would be nice if the selection of rolls and bread reached more than three bags of day-old yeast rolls and a pyramid of knock off Wonder bread on sale three for a dollar. And why exactly do your croissants need 50 ingredients? I’m fairly certain you can make them with less.

The DVD player showing High School Musical 3 while I stood in line.
I do everything within my power to avoid anything relating to Zac Efron. It’s just a policy I have. I also don’t want to know anything about, hear anything from or see anything related to high school musicals of any kind, particularly those with spoiled little acne-free Disney kids. Playing High School Musical 3 on a DVD player so I am basically forced to watch it while waiting in line to pay for my groceries is both cruel and unusual.

The stinky helper behind me in line.
While standing in the checkout line, a strange gentleman began asking me questions randomly. “Is that one broken?” “If the woman would just help her, she’d get done faster, right?” “They need about four more of these, don’t they?” I tried to nod politely, but the pungent aroma of his horrible breath nearly knocked me out. He even walked over to one of the machines to help someone out when she didn’t need help. Patience, stinky grasshopper.

The toothless lady at the self-checkout lane with the hundred.
In case you wondered who stinky breath was helping, naturally it was a toothless woman wearing camouflage and trying to pay at the self checkout lane with a hundred dollar bill. This prompted an exchange between she and stinky that made no sense. I’m fairly certain they were speaking a language only the mole people who live in the abandoned subway tunnels in New York understand. I don’t even want to speculate as to why she had a hundred dollar bill yet was unable to match the color of her socks.

The guy who nearly hit me in the parking lot.
Once I made it out of there, I got in my truck and proceeded to back out at roughly the same time as a guy in a black Mercedes about two spaces behind me. I was ahead of him slightly but seeing me must’ve triggered the gene that makes him want to prove he’s still a man, so he slams it into reverse and tries to get out before me. This was silly because my truck was already out into the aisle. He was CLEARLY pissed that I didn’t respect his bizarre attempt to out-testosterone me and raced up near my bumper. I leapt out of my truck and smashed his windshield with a bottle of Dasani water shouting, “I will crush your will to live!” That last part probably happened in my head, but still.

I think I’m going to stick with Randall’s and Target. Sure, Randall’s plays elevator music and Target is nearly always filled with screaming children, but it seems preferable to my sad ghetto Kroger.