Every Wednesday, you get a peek inside the mail bag. In this case, that bag is full of letters I write to ask questions we all want answered…or maybe just me. 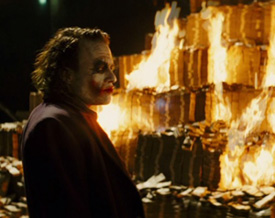 Today, I’ve decided to write a letter to the AIG execs who got bonuses from a mythical person who I wish ran the company and realizes just how ridiculous these bonuses are in the first place before handing them out.

Look, I know it’s tough work making phone calls, texting people on your Blackberry, taking meetings and ass raping the economy. It’s difficult taking two instead of three-hour lunches and having to sell off your third home in Nantucket because of how you broke capitalism, but, we’re like totally out of money and stuff on account of you being an idiot.

So, in lieu of you being a total fucking failure, we’re not going to like give you a bonus and, really, how could you even accept a bonus knowing:

a. You clearly sucked so bad at your job that you made the economy die.
b. You’re bonus comes from tax money, part of which is out of your own pocket, which like paying yourself and I think the circular nature of that would create a rip in the space time continuum, which would be fine if all it did was drag you and your executive buddies’ tired asses into it, but it would probably kill us all and we shouldn’t have to pay for your lameness more than we already have.

Now, the right thing to do here would be to refuse the bonus money and agree to work for cafeteria food and bus tokens for a couple months. Given how much money you’ve already made off of this crappy company, I’m thinking you could forgo daily lunch at Tavern on the Green, your annual trip to the retreat where you are bathed in the blood of foreign infants and clothed in the pelts of nearly-extinct animals and your nightly ritual of burning one hundred dollar bills because you like the pretty blue flames they make.

Everyone in your family could pitch in. Your wife could take a break from having liquid gold injected into her eyelids and maybe Buffy could go to her safety school, Harvard. Chip could trade in his Ferrari for a Porche and you could sell off a couple of your staff of robot servants including the one built only to jerk you off.

I know it’s a lot to ask but we all have to tighten our belts around here thanks to you and all the “experts” who nearly dry humped us into bankruptcy. Just be glad that instead of a bonus, we’re didn’t just to hire a guy to follow you around all day kicking you in the ass.

You’re lucky I don’t personally come down to your office, punch you in your fat caviar-munching face and take a 50 from your wallet just for making me waste my time. In fact, why don’t you get out of the building because if I do see you, I’m going to beat you with the shattered dreams of our shareholders and by that I mean a pair of nunchucks.

P.S. At next year’s company picnic, prepare for pin the tail on the loser. Two guesses as to who gets to be the loser.

← Tubesday: The Equalizer
Things I Love: Baseball on the Radio →