Oh, Sure, if You Want to Use “Statistics”

by Jeff on September 3, 2009 in Sorta Social Networks • 2 Comments
Share This 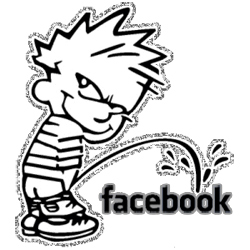 Lately, I’ve read (yeah, I read!) a number of stories about how people hate Twitter or hate Facebook and how, clearly, this means they suck and people are abandoning them in droves. There was a story (you can look up the link if you want, but I’m lazy) written by a teenager about how no one his age uses Twitter.

If this were posted on someone’s blog, I would casually dismiss it as the rantings of some person who poo poo’s such things – and by poo poo’s I mean actually defecates on his computer.

But, these are respected media outlets we’re talking about. The latest is from the New York Times Magazine and it is hilarious not because of what it says but because of how it contradicts itself and still pontificates as if the very statistics it quoted mean nothing.

The exodus is not evident from the siteâ€™s overall numbers. According to comScore, Facebook attracted 87.7 million unique visitors in the United States in July. But while people are still joining Facebook and compulsively visiting the site, a small but noticeable group are fleeing â€” some of them ostentatiously.

I’m sorry, but WHAT THE FUCK? Oh, sure, millions upon millions of people visit the site every day and millions more join every month. Yeah, I GUESS you could say that all those millions who post stuff on there constantly exemplify Facebook’s success, but I KNOW PEOPLE!!!

Seriously, NYT, are you kidding? I’m not in love with any form of social media (though Twitter and I lust for one another routinely and, oh, is she good…ahem), but the “I know people that hate it, so it must suck and be failing” is the dumbest argument on the planet. It’s the difference between statistical evidence and anecdotal and even a nimrod (that’s right, NIMROD!) can generally figure out the difference.

I have discussed sports online for many years because I’m a nerd for it and I often run across people who know very little about a given sport, so they talk about things they don’t understand but do it as if they do. “The problem is that they don’t run the pick and roll enough. I watched the game and I only saw it run once!!!” Look, Naismith, if you actually KNEW the game of basketball, you’d realize they probably ran a dozen or more different versions of the pick and roll in the FIRST HALF.

It’s that “my neighborhood is going to hell, so the whole world must be too.” This sense of over-exaggeration that seems to have proliferated with the birth of the internet that is so damn irritating. Everyone thinks they know more than everyone else just because they can point a mouse to a website and read a couple paragraphs of information.

I’ve got to imagine doctors must be PISSED about diagnosis sites. How many people you think fill up waiting rooms thinking they are dying when they really just have paranoid delusions? My bet is a lot.

We’re living in the era of the amateur and, as a result, people are skeptical of experts. They see conspiracy in complication and overload themselves with information that they probably can’t understand because they don’t have the experience or knowledge to fully grasp the concepts, but they think that because they can read some idiots lunatic scribblings on the internet, they have cornered the market on knowledge and common sense.

Leif Harmsen, once a Facebook user, now crusades against it. Having dismissed his motherâ€™s snap judgment of the site (â€œFacebook is the devilâ€), Harmsen now passionately agrees. He says, not entirely in jest, that he considers it a repressive regime akin to North Korea, and sells T-shirts with the words â€œShut Your Facebook.â€

Yeah, clearly LEIF is a source of reliable information when it comes to Facebook.

Nice job, NYT. Thanks for perpetuating the stupidity you once tried so valiantly to avoid. But, I guess if it’s on the web, it MUST be true, right?