by Jeff on October 20, 2006 in Bass Guitar, Uncategorized • 0 Comments
Share This

I spent money on music gear today. I haven’t done that, directly, in a while. Oh, I’ve spent a little bit here and there or replaced things that had been broken, stolen, etc. But, I haven’t bought anything NEW until today.

— quick warning here – this is going to be a story about technical music gear, so don’t bother if you think you’ll be bored —

For a few months, I had really been looking at buying a new amp. Most of the gigs I do are small. They really only require a 2×10 cabinet or, at most, one 2×10 and one 4×10 cabinet. I suspect a pair of 2×10 cabinets will do the trick most nights.

A friend of mine, who plays with a few bands locally including Arthur Yoria, recommended to me the Ashdown MAG 300 series combo amps. He has the 1×15 version and loves it. They are very reasonably priced and remind me a lot of the Behringer stuff, of which I have the BX3000T head.

The reality is that my 4×10 cabinet is just too freaking heavy to haul around to most gigs. The problem though is that my 2×10 is just not enough on its own. Plus, I really wanted to consolidate into something more compact. A combo with 2 tens made the most sense because it could go to small gigs and I could augment it with another cabinet if I needed more.

The only problem is that Ashdown only has one dealer in town – Rockin’ Robin. All they had in stock were their small mini stacks and their 600 watt tube combos. I tried the 600 and really did not like it. I’m more of a solid state guy when it comes to amps and the 600 was too low-end-y. The mini stack sounded pretty cool, but it was way too small.

They got it a few weeks back but it was only tonight when I was able to make it there. I was VERY impressed with just the 1×15. I’m not normally someone who likes 15’s for bass. They tend to be a little slow in response and can be a little muddy for me. It’s the same reason I prefer J style pickups to P style. But, this 15 was clean and surprisingly LOUD – I mean, really loud!

I hooked it up to a 2×10 SWR and the tone was great. The cabinet didn’t have quite as good a sound as the built-in speaker, but that was more the cabinet than the amp. Frankly, if the 2×10 sounds as good as the 1×15, I’ll be extremely happy.

To be honest, it sounds a lot like my Behringer head in terms of how much drive it has, but the EQ is 10 times better and the overall tone of the amp is fantastic. I went ahead and ordered the MAG 300 2×10 combo and a 2×10 extension cabinet. I have a feeling that will be my primary rig for a while. I got them both online because it was just cheaper than going through Rockin’ Robin. And, by going online, if it does show up sounding bad, I can return it, something I can’t do on a custom order locally. 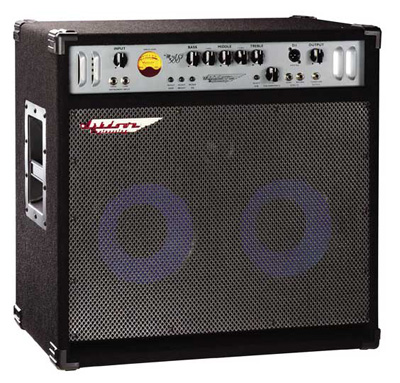