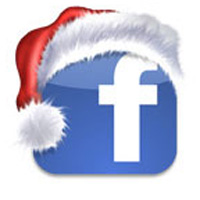 What do you do on Christmas Eve when it is cold and snowing outside and your family has made its last post-dinner tech support request to fix their VCR (sigh)? I wouldn’t know because it didn’t snow on Christmas and I consider VCR’s the tools of the devil and won’t touch them for fear my hands will turn to ash. It’s in the Bible, look it up.

But, if you live in some God-forsaken cold place like Detroit or Canada, your last nerdy refuge over the holidays was apparently Facebook.

On December 24, social networking site Facebook saw its most traffic ever within the United States, according to new data from Hitwise. That tops Facebookâ€™s previous record, which was set in July.

I’m sure most of you guys were on Facebook Super Poking people (and not in the fun way) and sending people imaginary gifts to go under their virtual trees, which would be sweet if it weren’t so sad.

You may have BriteKited your location to Twitter as “North Pole” just to get a chuckle out of your friends who don’t care or hit on an 18-year-old MySpacer who is really 14 and told her you are 20 when you’re really 35, which, in reality, is probably normal behavior for you.

If you were old school, you probably IM’d some girl on Yahoo chat – by girl I mean, 37-year-old man who lives in his mom’s basement – to “hit you up if she is interested in a Ho Ho Ho filled Holiday” or flooded your IRC channel with “All Your Christmas, Are Belong to Me” messages.

Whatever your flava, the truth is that the internet allows nerds like us to escape the more depressing elements of the holidays like:

Thanks to Twitter, Facebook and MySpace (assuming you are a band, a hooker or a pedophile), it was a holly jolly Christmas for all the nerds across the land. God tweet us, every one!