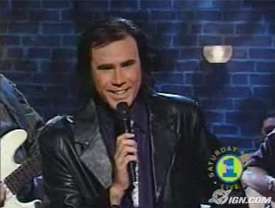 Yes, I Twittered the Grammys last night (where were you, non-nerd?). As usual, NARAS provided me with a plethora (and, yes, I DO know what that word means) of material.

There were Katy Perry’s melons. I’m talking about her fruit-designed set, perv, not her lovely, cleavagy bosom. Ahem. The whole set looked like a giant Carmen Miranda had heaved fruit at the stage from her gargantuan hat. Perry was lowered to the stage in…wait for it…a giant banana.

But, it wasn’t all comedy. Jennifer Hudson gave a stirring performance just months after the deaths of family members. Al Green and Justin Timberlake rocked “Let’s Stay Together” with Boys II Men and Keith Urban (WTF?) backing them up. Radiohead rocked the 5/4 groove of “15 Steps” backed by the USC Trojan marching band (Tusk anyone?).

Sir Paul and Dave Grohl had an inspired collaboration on “Saw Her Standing There.” Grohl, in the past 12 months, has played a Beatles song with Paul McCartney at the Grammys and two Led Zeppelin songs with Jimmy Page and John Paul Jones at Wembley in London. Good year for that guy.

There were some other decent showings and a few terrifying moments like Stevie Wonder teaming with The Jonas Brothers (ACK!) and a duet with Miley Cyrus and Taylor Swift, which was Disney-aster.

Generally, the Grammys were what the were – a self-congratulating good time filled with more rock than talk, thankfully, mixed with CBS crossover promotions and Dwayne “The Rock” Johnson reciting really bad jokes.

My favorite moment, however, came later in the night when Neil Diamond semi-talked his way through Boston Red Sox anthem “Sweet Caroline,” which had the crowd on its feet singing along and even Sir Paul chanting “SO GOOD, SO GOOD, SO GOOD” from his front row seat.

The best part of the performance was when Diamond, in Robert Goulet-meets-Will Ferrel style, recited the last line of the second verse in his deep bassy growl…

“How can I hurt when holding you?”

And immediately followed it with the yell, “IMPOSSIBLE!!!”

It was so Vegas schmaltzy, it nearly brought a tear to my eye.

One Reply to “My Grammy Moment”