Mutual of Omaha’s Wild Kingdom in My Yard

For those of you too young to remember, there used to be a show on television (Sundy nights if I recall correctly) called Mutual of Omaha’s Wild Kingdom featuring Marlon Perkins and his brave if not too bright assistat, Jim. Think of them as the original Crocodile Hunters without the insanity and bad shorts.

Over the past couple of days, I’ve gotten my own glimpse into the wild kingdom that is my yard and, no, I’m not talking about roaches.

For most of the time I’ve lived in this house, there have been opossums and the occassional raccoon that have come to the back yard to eat the cat food set out for the cats everyone around here feeds. Since last year, there has been one raccoon coming around I named “Rocky.” I know, I know, very original.

Anyway, Rocky is still a juvenille – probably a year and a half. He’s gotten used to me enought that when he visits at night, he’ll even eat out of my hand if I sit there pretty still. He won’t let me pet him, but he’s generally comfortable with me. This last week, he came out a few times during daylight hours and I caught him with my camera.

There are pics of him in my photo gallery.

In addition to Rocky, I see lots of spiders in the yard. In general, the presence of spiders is a sign that the yard is healthy, so that’s good. And, I’ve never really seen anything other than garden variety spiders until this weekend when I saw my friend here. 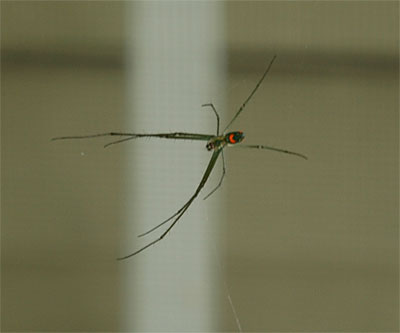 Now, I’m certainly no expert, but that looked an awful lot like the mark on the back of a black widow. After doing some research, I determined that it wasn’t a black widow, but it was creepy given that it was on my front porch.

Nature in my own yard. Pretty interesting.

← Lack of Support Not Just a Problem for Breasts
Hey, It’s a Brand New Blog! →