Man Dies, but Twilight is AWESOME!

But, seriously, I’m blogging for you, my people! That’s how much I love and care for each and every one of you, except for you – you know who you are.

So, I saw this and had to post it. Apparently, in Wellington, New Zealand, a homeless man was found dead after a showing of Twilight: Eclipse. The authorities don’t consider the death suspicious, other than the fact that they found punctures on his neck and HIS BLOOD WAS MISSING!!! Kidding, but that would be crazy though, right?

What I want to highlight (literally) is the way the story was reported by Stuff.co.nz, which doesn’t appear to be affiliated with the half-naked girl magazine Stuff here in the US. Please note the sections in yellow below. 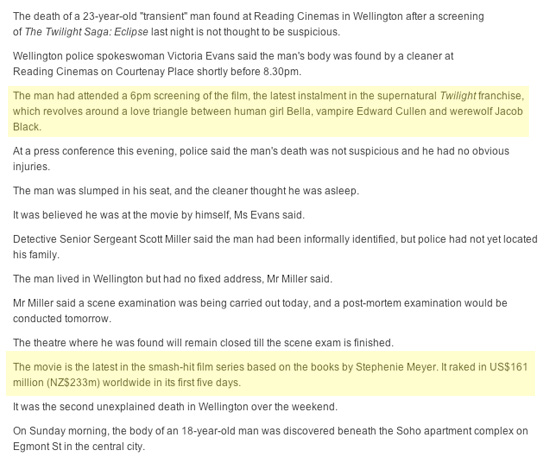 I’ll give you a moment to allow that to sink in. *whistles theme to Andy Griffith*

In a story about a man who DIED, there are plot synopses and box office statistics for the movie. I guess I could ALMOST get the reporting of box office numbers at the very end of the story (although those numbers preceded information about an 18-year-old man found dead on the same weekend), but to put the plot of the film right smack dab in the middle of a story about someone who died is really repulsive.

C’mon, Stuff.co.nz, you’re better than that. Or maybe you aren’t? I really don’t know as I don’t live there or read the stories and the only real connection I have to your island country is the Lord of the Rings movies, and that kind of makes it worse given how you allowed Mordor to exist and all and didn’t like even tell anyone.

Which reminds me, elves and trolls and dwarfs and wizards? Really, New Zealand? When were you going to tell the rest of the world about this stuff? I guess with all the death from the battle for middle earth, you feel the need to lighten up your news, hence the plot synopsis in the middle of a dead homeless guy story?

I’m sure you guys all find the whole vampire and werewolf thing silly anyway. I mean, even if they did exist, they’re no match for Gandalf.

One Reply to “Man Dies, but Twilight is AWESOME!”