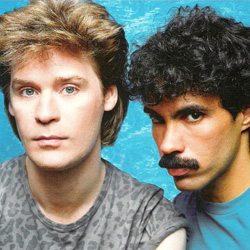 Daryl Hall and John Oates, both from Philadelphia, began performing what they called “rock and soul” in the early 1970’s. They have had 34 songs chart on the Billboard Hot 100 including six that went to number one. They have six gold and six platinum albums and sold over 80 million records worldwide.

But, their first albums had very little success. It wasn’t until the release of “Sara Smile” in 1976 that they had their first hit and that was followed by today’s song, “She’s Gone.” The song was recorded for one of the first H&O records in the early 70’s, but re-released by the label in 1976.

“She’s Gone” is a soul ballad about heartbreak. It’s expertly performed, has a great hook and contains a rarely heard three straight key modulations right before the last chorus, which is shocking enough. But, what the hell is with the lyrics?

Sorry Charlie for the imposition
I think I’ve got it, got the strength to carry on
I need a drink and a quick decision
Now it’s up to me, ooh what will be

Um, she’s gone, dude. You just sung it! There’s no quick decision to make. The bartender (or the tuna fish guy) can’t help you with this one.

Um, gross. Frankly, any chick who would use her toothbrush so long that you can tell immediately it is worn down is probably not really worth saving. Dental hygiene is like important.

I’m not a scientist or anything, but I don’t think it’s not “carbon and monoxide” so much as it’s just “carbon monoxide.” And it probably won’t choke your thoughts away. It’ll just like, you know, kill you, which puts a damper on that whole spending eternity in the city thing.

She’s Gone Oh I, Oh I’d
pay the devil to replace her

Clearly, this girl leaving has messed this dude up.

Hall & Oates on the Daily Show:

← Things I Overheard While Out on Easter
Light Rock Monday: Lady →