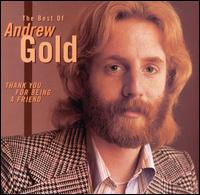 Today’s Light Rock Monday song is Andrew Gold’s “Lonely Boy,” released in 1976. Gold was the son of a composer and a singer, so it runs in his blood. By the time he was a teenager, he was already a working musician. His music, production and arrangement credits include Art Garfunkel, James Taylor, 10cc and Don Henley. His most recognized performing and arranging credit is with Linda Ronstadt, working on her huge hit album Heart Like a Wheel.

“Lonely Boy” was Gold’s biggest radio hit reaching #7 on the Billboard Pop Chart, but his best-known song is “Thank You For Being a Friend,” which wasn’t popular at the time of its release but found an audience as the theme song for “The Golden Girls.” While Gold didn’t sing the version of that TV theme, he did sing the theme for the Paul Riser, Helen Hunt sitcom “Mad About You.”

It’s clear that Gold had some mad production skills as “Lonely Boy” sounds about 4 or 5 years ahead of its time sonically. The arrangement demonstrated Gold’s skill as a multi-instrumentalist as well.

But, at it’s heart, “Lonely Boy” is an ode to the lost soul of a young boy who feels abandoned by his parents and confused by the changing social norms.

Yes, it’s corny. Yes, it’s marginally sappy. But, it’s sweet in its nostalgic view of a clearly complicated childhood. I was an only child so, in a way, I get the vibe the song is trying to create.