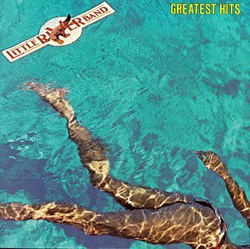 A former girlfriend of mine has this awesome cat named Tubby. When I would hang out over at her apartment, I would, naturally, pet Tubby and pay attention to her like I do my own cats. I even wrote a song for her to the tune of today’s light rock song, “Lady” by the Little River Band.

Tubby, let me take a look at you now.
You’re there on the blanket box,
Makin’ me wanna pet you somehow.
Tubby, I think it’s only fair I should say to you,
Don’t be thinking I don’t wanna pet you, cuz, Tubby, I do.

The first time I sung this, my ex appeared from around the corner and said, “You are so weird” and laughed.

I have made up songs for many of my animals and I have friends who have done the same. I recently found out that two friends of mine have songs they sing to their dogs to the tune of “Still Fighting It” by Ben Folds. We’re all a little weird I guess.

Anyway, in honor of Tubby I present you with “Lady,” a song by Australian 70’s light rockers Little River Band. LRB is one of those bands I often refer to when discussing middle of the road pop bands of the 70’s. They had a handful of hits (none reaching number one) and a very solid career selling 25 million records worldwide, but they aren’t a band everyone knows right off.

“Lady” reached #10 on the Billboard charts in the US and has been featured in a number of movies. Like a lot of the songs I love from the 70’s, “Lady” contains some really odd if not completely nonsensical lyrics that sound like they may have been yanked from a rhyming dictionary, but probably made a lot of sense in the pale haze of the cocaine-coated late 70’s.

Look around you, look up here
Take time to make time, make time to be there
Look around, be a part
Feel for the winter, but don’t have a cold heart

Honestly, I don’t even know what the hell that means.

Well, thankfully, he loves you best because otherwise all that work of being there when he needs you would be a huge waste.

A long time ago I had a lady to love
She made me think of things I never thought of
Now she’s gone and I’m on my own
A love song has come into my mind
A love song, it was there all the time

Again, what the hell? You just said you had someone and now you’re talking about someone you lost. Stay on point here, buddy.

So lady, let me take a look at you now
You’re there on the dance floor, making me want you somehow
Oh lady, I think it’s only fair I should say to you
Don’t be thinkin’ that I don’t want you, ’cause maybe I do

It’s really like someone just threw a bunch of lyrics together that rhymed and said, “Hey, that sounds good.” First, he has a lady, then he HAD a lady and now he’s looking at a lady. And she’s making him want her “somehow,” like he’s not sure and that trend continues when he says “maybe” he wants her. I’m glad he thinks it’s fair to tell her that maybe she’s hot enough for him to want her, but maybe not.

Look around, come to me
I have no answers, but know where I wanna be
I look around, play a part
I was born in the winter and cooled by a warm heart

Again, no clue. I don’t think they have a clue either. How the hell are you cooled by a warm heart?

This is proof that a really good melody can overcome even the most ridiculous of lyrics.

← Light Rock Monday: She’s Gone
Most of the Time, Air is Free →