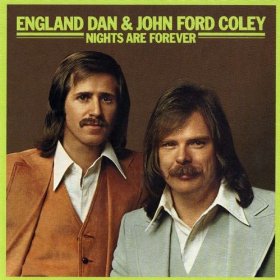 As part of my ongoing effort to have re-occurring themes on my blog, I’ve decided that what we all need is a little rock that won’t hurt your ears. I don’t mean Michael Bolton or some crappy Diane Warren song. I’m talking about 70’s light rock.

In my first installment, it’s “I’d Really Love to See You Tonight” by England Dan and John Ford Coley. The duo of “England” Dan Seals (brother of Jim Seals from another popular 70’s light rock duo, Seals and Crofts) and John Ford Coley formed in Austin, Texas and recorded a number of hits including “Love is the Answer” and “We’ll Never Have to Say Goodbye Again.”

“I’d Really Love to See You Tonight” was written by Parker McGee and released by the duo in 1976. It reached #2 on the Billboard charts.

To me, this song is the the quintessential 70’s tune. Much like “Love the One Your With” was a classic 60’s hippie anthem to spreading peace and love to whomever you are with at the moment, “I’d Really Love to See You Tonight” was the no pressure, sensitive guy casual sex song so perfect for the late 70’s.

In the song, the singer just wants to “hang out” with the girl. He emphasizes to her just how easy going he is with the chorus:

I’m not talking’ ’bout moving in,
And I don’t want to change your life.
But, there’s a warm wind blowin’ the stars around,
And I’d really love to see you tonight.

Translation: I’m not trying to pressure you, babe. We don’t have to do anything special. Let’s just get together and, you know, see what happens.

Further emphasis in the bridge:

I won’t ask for promises,
So you don’t have to lie.
We’ve both played that game before,
Say I love you then say goodbye.

See, this guy gets women. They don’t want hang ups and pressure. They just want some hot man love on a sultry summer evening.

He gives some suggestions for what they could do as a precursor to the sweet, sensitive love making they’ll do later in front of a roaring fire on his bearskin rug while sipping red wine. Who cares if it is 85 outside? He’ll crank up the a/c just for you, sunshine.

We could go waking through a windy park.
Take a drive along the beach,
Or stay at home and watch tv,
You see it really doesn’t matter much to me.

He doesn’t care what you do. I mean, he REALLY doesn’t care. So much so that everything he mentions is absolutely free. But this isn’t about money. He wants you to know he’s sensitive, sexy and not anything like those slick-talking disco slime balls that will ask “what’s your sign, baby” at Studio 54. Not this guy. He’s laid back and casual, much like the sex you’ll be having later after the drive along the beach.

No doubt after they are done with their gentle lovemaking, she can wear his flannel pajama top while he wears the bottoms. He’ll probably even pay her cab fare home because he’s a total gentleman like that..

Stream “I’d Really Love to See You Tonight” on BlipFM.