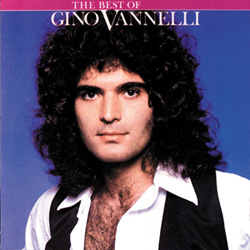 When you want smooth, soul music, there is no better decade than the 70’s. Al Green, Marvin Gaye, Curtis Mayfield and…Gino Vannelli?

Gino Vannelli is nothing if not enigmatic. His name sounds like he should be the manager of a mob-owned Italian restaurant in Manhattan’s Little Italy, but he’s actually a successful singer, songwriter and performer from Canada who now lives in The Netherlands. He’s won multiple Juno awards and was the first white singer to appear on Soul Train (or Sooooooooul Train for those who remember the intro) – interesting considering Vannelli’s hair in the 70’s looks like he could use some Soul Glo.

I’ve always liked “I Just Wanna Stop,” a soulful pop song that reached #4 on the Billboard charts in 1978, but I wasn’t really aware that this song was Vannelli until recently. I had always know Vannelli as the guy who recorded the 80’s new wave hit “Black Cars.” I had no idea he got his soul on too.

Vannelli continues to perform including a sold-out stints in Las Vegas in 2007. In addition, the Boston Celtics have made Vannelli a bit of a cult hero with the popular video they use of a dancer from American Bandstand in the mid-70’s wearing a shirt that just says “GINO.” Leave it to Boston to revitalize both “Sweet Caroline” and Gino Vannelli.

On his website, Vannelli certainly hasn’t lost his flair for the dramatic posting this in early February:

Shot my first video in over fifteen years – location, a chichi haunt called, Jimmy Woo – a multifarious Chinese puzzle of blind alleys leading to dark corners. Took me a while to acclimate to the charmed and perfumed air teeming with half-naked nymphs taking to the dance floor like Thompson’s gazelles. As always, the music transports me to where I ought to be. Something about the high-speed shuddering (harmonic motion) in the head when I sing that reigns me in. Think it’s not unlike the whirling dervish’s experience.

Ok, Gino, whatever you say. Almost as weird as the intro to the video for the song below in which a crazed crowd tears across the stage and is chased off by roadies and bouncers before the Canadian singer fades in and the crowd noise fades out.

Apparently, WTF moments abound when it comes to Gino Vannelli.

← Don’t Like the Weather in Texas?
Tubesday: The Equalizer →