Light Rock Monday: Dance With Me 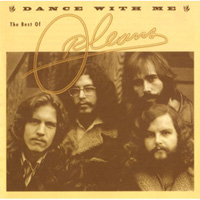 In the mid-70’s, there was a lot of blending going on and I’m not just talking about mixing bananas with daquiris or cocaine with heroin. Bands were experimenting with different stylistic concepts, which gave us the inspired – Joni Mitchell mixing folk, pop and jazz, for example – and the disastrous – the bizarre combination of disco and ducks.

One very popular musical experiment brought us a wave of California-inspired folk/pop/country artists, the most successful of which was the Eagles.

Others followed like Pure Prairie League, Jackson Browne and this week’s selection, Orleans. While they weren’t born in California, they did come from the hippie haven of Woodstock, New York and wrote a number of hits including their biggest and most annoying, “Still the One.” Anyone who watched television in the 80’s remembers ABC’s dreadful overuse of “Still the One” for its promotional campaigns.

It should also be noted that Orleans is responsible for one of the most disturbingly homo-erotic album covers of all time. Few things are as unappealing as a bunch of shirtless, bearded 70’s guys hanging all over each other. Ack!

“Dance With Me,” released in 1975, reached #6 on the Billboard charts and is one of those sweet, sensitive 70’s songs that is all about dancing, being happy and all the things those of us who grew up in that era reminisce about when we picture the dreamy golden glow of our youth. When I hear this song, I immediately picture a beach bonfire surrounded by bronze, blond hippie chicks and dancing, drinking beer and smoking weed. Granted, this is not from memory because I was like 6 when this song came out and I don’t remember dancing on a beach with half naked, stoned hippie chicks, but, then again, I was probably stoned too. Thanks mom!

What makes “Dance With Me” so musically interesting (to me anyway) is the fact that the entire song save one line is sung with lush vocal harmonies and only backed by acoustic guitar and bass. Because of that, the one bridge line of the song sung solo stands out and makes for an incredibly catch hook.

Mostly when I hear “Dance With Me,” I imagine a sensitive 70’s chick in a cowhide bikini, mini skirt and cowboy boots, her hair in braids, swooning over some folk-country singer as he serenades her with his beat up Kay acoustic guitar on some secluded beach, their VW van sitting silently in the background while a fire crackles and waves crash along the shoreline…right before they are hacked to death by a machete-wielding serial killer who just escaped from a prison for the criminally insane. Wait, that’s a movie.

Anyway, let’s be honest. This may have been the only way for a balding guy with a massive beard, a caved in chest and a meek sense of hopelessness to score with a hot hippie chick – that, a box of red wine and sweet, sweet pity.

Stream “Dance With Me” on BlipFM
Lyrics
Orleans Wikipedia