by Jeff on December 3, 2006 in Me Griping, Stuffs for Eatin' Archive, Uncategorized
Share This 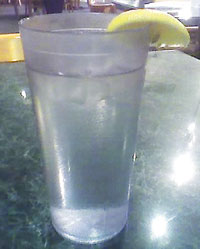 Maybe I’m old fashioned or southern, but I like my water with ice and that’s IT! Used to be that if you wanted lemon in your water, you asked for lemonade. Now, whether you want that pungent sliver of yellow fruit with your water or not, you get the damn thing.

I have nothing against lemons. I just don’t like them in my water. And, I don’t understand the concept that those of us who don’t want lemons must request that we NOT get them. Shouldn’t providing or not providing lemon with water be a request by the customer, not an automatic action by the restaurant?

And when did this switch happen? It seems like we went from lemon lovers almost having to beg for sour goodness in their water to those of us who don’t want lemons practically having to plead with our waiter to keep those damn slimy seeds out of our drink.

What is frustrating is that there is no longer set etiquette for this. At least when lemons were as scarce as photos of Britney Spears wearing underwear, anyone who wanted one had to ask. That made sense given that it is an additive.

Now, if I am with someone at a restaurant who likes lemon with his/her water, we both have to make requests. This is particularly embarrassing when you are the guy that has to say, “Uh, water, with NO lemon.” And I have to emphasize it because it never fails that when I do, the waiter looks at me like, “What kind of FREAK takes his water lemon free???”

Often, I forget or just choose to ignore it and remove the wedge when it gets to the table. At that point, I un-hinge the lemon slice from the side of my glass and immediately deposit it on the table. This is gross, but I have no choice. The quicker that yellow fruit is off my glass, the less chance it has of contaminating my perfectly good, overly-chlorinated tap water.

Of course, I still have to pay attention to the part of the rim that had the lemon on it. If I don’t, I end up taking a sip in that spot only to be subjected to…well, you get the picture. Even worse is when I get my glass and the lemon is in it. Ugh.

I love Le Peep for breakfast food, but they go one step further submerging a lemon slice at the bottom of their caraffes of water leaving it there to cast its taste off into the whole damn thing. For me, few things are more disgusting than a plate of sweet pancakes with syrup alongside a glass of sour lemon water. Ick.

It’s a dilemma, albeit a tiny one, that is likely far more annoying to me than anything else, but if this blog isn’t for worthless crap that annoys me, what the hell is it for anyway?