I’ll Give You Something to Be Distracted By 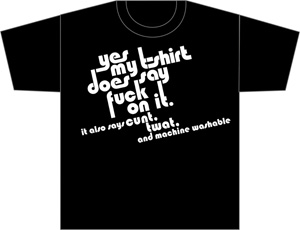 I glanced at the good ol’ Chron.com this morning to see this story about how the Supreme Court decided not to weigh in on a case involving a high school boy who sued his school district because they would not allow him to wear t-shirts with political slogans on them including one that said “Freedom of Speech” An appellate court upheld the dress code saying it was meant to eliminate distractions.

This reminds me of my high school. The year after I graduated, the school enforced a hair length code for boys. I like to believe it was because of me and my spectacular mullet (it TOTALLY was)! A reasonable application of the rule would have allowed boys already in attendance with hair not meeting the school’s policy to keep it that way until graduation and enforce the rule on new incoming students. Within a couple years, everyone would be under that rule.

Of course, they didn’t do that and forced the code on everyone. A number of friends I knew at the school decided to shave their heads bald in protest. The school was appalled, but there was no rule against baldness.

Like in this case, my school cited “distraction” as the reason for putting a silly rule in place. Everything from hair touching your collar to facial hair on boys to shirts without collars to pants without belts to too much makeup on girls was a distraction. No shirts with messages. No tennis shoes without laces. No high heels. All of these things were a distraction to learning and were banned, which I find pretty hilarious since none of these things are nearly as distracting as most of the clothes we wore in the 80’s – shoulder pads and parachute pants…I rest my case.

So, in an effort to help our school system, I’ve come up with a list of items currently not banned that are more distracting than what is listed here. You can thank me later, schools of America.

What exactly is wrong with schools that don’t recognize that Catholic school girl uniforms are NOT a good idea as mode of dress for hormonal teenagers? For strippers or sexy Halloween costumes, sure, but not for teenage girls…who aren’t strippers or dressed for Halloween. Do none of the men or women making these decisions have sex? I’m sorry, what? Priests and nuns don’t have sex? Wow, who knew. Anyway, I recommend all cleavage, tight pants and skirts above the ankle be banned. “Bring back forehead hotness” should be the motto, like Victorian England with less plague.

Oh, man, nothing is a bigger (pun intended) and more awkward distraction than a REALLY fat kid who has trouble squeezing behind a desk or bumps into everyone in the hall. You want to make it easier on everyone, ban fat kids…and Twinkie’s.

You want kids to not pay attention, allow some poor schlub with a giant zit on his nose to come to school. Best way to handle that is to send him home with a medical absence until he can get that thing under control. If it’s acne, recommend home schooling.

Anyone in Any Group

The sportos and motor heads, geeks, sluts, bloods, wastoids, dweebies, dickheads…they all adore him. They think he’s a righteous dude. Grace from Ferris Bueller’s Day Off sums up a major problem with high school: groups. I think all groups should be banned to avoid any, you know, fraternization or bonding. Perhaps putting every student in a cubicle to isolate them prepare them for their future jobs in the corporate world, which is what school is all about anyway. *humming God Bless America*

David Lee Roth was “Hot for Teacher” and girls in Indiana Jones swooned over Harrison Ford’s Dr. Jones. Best way to avoid this phenomena – along with blow jobs in the janitor closet – is to not ever hire pretty people or allow pretty people to attend school. They have so many advantages already, they don’t really need school. We all know this. I guess you could try to make them ugly with clothes and hair, but, frankly, that could be worse because they could go all hot librarian on you and you’re REALLY in trouble.

You also have to exclude the freakzoids because, Lord knows, you get some mangled weirdo in a classroom and everyone is going to stare. Don’t they have like special schools for them?

Pencils are great for severing an artery in a gang fight, from what I’m told. Pens can be used to scrawl “Kill Vinod” into the desk of a classroom where the Pakistani teacher’s accent is so heavy, it makes learning Algebra impossible (true story, actually). Paper becomes spit wads and notes to be passed and origami, which is just stupid and frustrating when you spend all day trying to make this bird and the damn paper tears and all you can think is the only reason God even invented paper was to make you miserable and you want to burn down the forests and eat a gallon of Chubby Hubby…I’m sorry, what?

Lockers are a great place to hide contraband. No need to search what isn’t there, right? Kids should just have a pouch for their essentials – glasses (not sexy glasses though), notepad made of wood since there is no paper, crayons – surgically attached to their arms. That seems TOTALLY reasonable.

Ban hunger. I’m pretty sure this is something charities are already working towards and I find it a laudable goal.

History is controversial. All that slavery and war and Teapot Domes and stuff. Oh, and math, which is confusing and makes me want to hurt people, and science which requires cutting up stuff and chemicals that can singe off your eyebrows making you ugly (remember that rule?). You might want to eliminate Health and Wood Shop because one teaches sex and the other is a euphemism for sex. Get rid of any vocational training because of the tools, which can kill and dismember people. Music and art can go – no one gives a shit about that stuff anyway. English is fine, but no reading, just simple sentence diagrams, which were not created by Satan as previously thought. In fact, just eliminate subjects all together. Do they even teach subjects anymore anyway?

See how easy that is. All you’ll be left with is a room full of cubicles and perfectly average-looking people listening to lectures about standardized testing. It’s just as our founding fathers intended!