I Have Crossed Oceans of Time to Find This Sex Toy 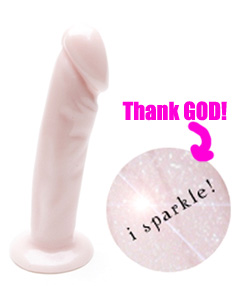 I know a lot of you ladies love you some Twilight what with the teenage angst, the heavy makeup and the eternal death motif, but do you really want a silicon vampire schlong this close to your “love-cave-between-my-legs?”

Probably not, but the description alone is worth checking it out.

JUST IN TIME FOR HALLOWEEN! Who doesn’t love those dark and mysterious vamps on the screen and in the books we all thumb through lustfully? That’s what we thought. For those of us who fantasize about being spellbound and tantalized by the forbidden comes The Vamp. We promise this vamp won’t be the only thing coming for you in the night.

Yes, just in time for Halloween because it’s not enough to get dressed up like a smelly pirate hooker, you also need to go home and screw yourself silly with a pink vampire wee wee. It’s the most white trashiest time of the year, apparently.

Oh sure, that’s “flesh tone” if you just disconnected it from My Little Pony. Just in case it’s been a while since you’ve seen one, the average male member is not hot pink and almost never shimmers with glitter. Maybe that one time in San Francisco, but that’s for another time.

And did anyone else find it funny how they capitalized “Sire” as if he’s a real person hovering over the computer of this PR person while she writes about a fake plastic wang? I guess she could be British and talking about Prince Charles, but that would be even creepier, so I’m going to forget I even considered that. You should too, unless you like that sort of thing. God, you’re so weird!

Don’t be surprised if this toy seduces you, its long sleek shaft and deliciously ridged head calling to you in the twilight. But don’t save this for just nocturnal escapades, try taking our Vamp out in the sunlight and watch him sparkle.

Nice reference to twilight without infringing on copyright. I can do it too!

“Count” your blessings, ladies. This thing will leave you so breathless, you’ll need Vlad the Inhaler (sold separately).

Which, by the way, would make a killer merchandising item for the Twilight crew. They could get some Primatene Mist, spray paint them black and sell them at Hot Topic! You’re welcome, Twilight producers!

But, back to the pink plastic missile of the un-dead. Do you really want a sex toy that sparkles in the sunlight? It’s not like you are taking it to the park to enjoy after a picnic of hot dogs, cucumbers, pickles and carrots…or maybe you are. You FREAK! I’m SO impressed. How YOU doin’?

← That’s It, I’m Going to Clown College and None of You Can Stop Me
The Doucheification of Washington Avenue Soon Complete (UPDATE) →