Here’s One: Guess that Advertisement Tagline

Ok, so I’m on MySpace.com and they have these annoying ads on there like most commercial websites. I rarely if ever pay attention to them no matter how much flashing or weirdness they display.

But, this one caught my attention…

But, when I read the ad (yes, I do read the ads and don’t just stare like an idiot), I came across something rather curious.

This is an ad for a dating service. No big deal. It is an ad with a nice looking woman in it. Again, no big deal. Here it is with the taglines blurred. 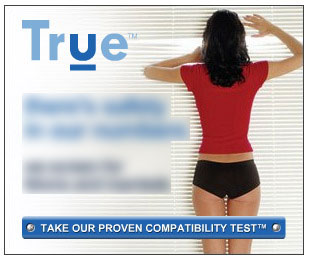 Ok, so a hot girl is looking out the window. Is she waiting for true love? Is she looking to see if her boyfriend (or girlfriend – hey, shut up!) has arrived?

At this point, we can make some assumptions just based on how she looks. She’s wearing clothes that make her appear to have either just gotten out of bed or as if she is lounging around the house or maybe about to workout. Her hair is down, so probably not a workout.

But, her clothes aren’t wrinkled or anything, so that may say that she’s about to go to bed…perhaps with whomever she is waiting for.

This is particularly odd given the fact she is looking out a window during the day. Ok, so this looks suggestive is the point I’m trying to make.

So, what would be a tagline for something like this? How about:

“Waiting on your TRUE love?

Maybe he’s waiting on you…”

See, I could write this crap. Makes sense. Incorporates the name of the company. (by the way, that tagline is copyright me, all rights reserved)

Ok, the great reveal. What does it ACTUALLY say? 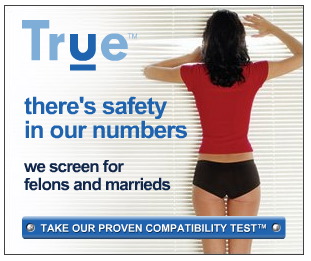 WTF??? Online safety? So, she is peeking to see if her STALKER is outside? Why would she be hiding in short shorts? Why stand up so tall and peer out the blinds? Why would it be the middle of the day?

So many questions going unanswered but the most important question is, why would some idiots think that this ad is a good idea? Not only does it send the message that if you are hot, you are probably in danger, but it actually objectifies women (this ad isn’t aimed at women no matter what the caption says) in a way that could promote stalker-like behavior.

Maybe I’m too frustrated by an ad. Maybe I need breakfast. Mmmmm…breakfast.

What was I saying?