Give Me Some Hot Wings, Hold the Buttocks 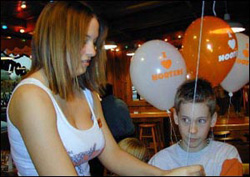 Some work environments require women wear skirts that are at or below the knee or that men wear a tie. Some places have safety gear and work boots. Then there’s the beloved Hooters.

The Smoking Gun managed to procure the employee handbook for Hooters that includes their dress code and style guide. Let’s look inside, shall we?

Hooters offers its customers the look of the “All American Cheerleader, Surfer, Girl Next Door.” The essence of the Hooters Concept is entertainment through female sex appeal, of which the LOOK is a key part. When you are in the Hooters Girl Uniform you are literally playing a role; having been cast for that role, you must comply with the Image and Grooming Standards that the role requires.

Oh, where to start…

When Playboy referred to Playmates as “girls next door,” I never fully understood, because the girl that lived next door to me didn’t have size DD fake boobs and walk around without pants on…most of the time. The fact Hooters has added “All American Cheerleader” I guess helps slightly better define that look.

If the girl next door also happens to be a cheerleader, there is probably a greater chance she will be hot, have large breasts and perhaps galavant around sans undergarments. I have no idea how “surfer” made its way into this concept, but whatever.

More accurately, it describes Hooters Girls as “playing a role.” I think what they meant to say was “role playing” and I’m sure that role will be repeated all across America when wives and girlfriends are asked to don the uni for their partner’s birthday. Sure, it isn’t as sexy as an Arby’s uniform, but it’s something. Except, in this role, there won’t be chicken wings on the menu, if you know what I mean…ha ha ha…cough…ahem…

For you nerds, this may seem confusing because you don’t really understand why this is sexy or even what a Hooters girl might look like in real life. In that case, just replace “Hooters Girl Uniform” with “Princess Leia slave girl costume.” That should clear it up.

Make-up is to be worn always to best accentuate your features. Hooters Girls are to be camera-ready at all times. This is show business, just like the modeling industry. Make-up is not to be too extreme, nor too minimal.

Yes, this is EXACTLY like the modeling industry. Nothing says couture like hot pants and wife beaters!

Our LOOK is wholesome, yet sexy, and the uniform is athletic by design.

Excessively long nails distract from the wholesome look and will not be allowed.

The mention of “wholesome” comes up often. Maybe it was the fact I was raised by Puritans on a farm and taught that bare ankles were the tools of the devil, but it seems to me that the very IDEA of Hooters distracts from the wholesome look of women in general.

After I moved off the farm, I tried to learn about the ways of the world, so I worked for an Indonesian prostitution and crack ring. If there is one thing I learned from those crack whores, it’s that Hooters costumes sell because sex crazed freaks love to get their hot wings sauced by a Hooters girl…wink…wink…nudge…nudge, if you catch my drift…ahem…moving on.

Only approved Orange Hooters Girl Shorts are to be worn, sized to fit, and should NOT BE SO TIGHT THAT THE BUTTOCKS SHOW.

I don’t make this stuff up. They want women in tight tank tops and short shorts, but GOD HELP US if the butt cheek comes out for some air. Cleavage is classy, but buttocks are, heavens to Betsy, scandalous!

Pantyhose are a required part of the uniform and are to be worn any time the Hooters Girl uniform is worn. The only color to be worn is Suntan. You may go a shade darker if your skin color is darker than the Suntan pantyhose color.

Seriously, who comes up with this crap? Pantyhose with short shorts? Add some leggings and roller skates and you’ve got a disco roller party! Nothing says classy like pantyhose and hot pants if by classy you mean hideously dated and depressing.

And Suntan color? SUNTAN? Words fail me, but this probably sums it up.

Approved name tags are to be worn at all times on the left side of the Hooters Girl uniform. No provocative nicknames allowed.

So, I’m assuming “Bitchcakes,” “Ho” and “Fuck Off” are probably not appropriate nicknames? What about stripper names like “Star” or “Chastity?” What if your parents named you “Vagina?” How would you handle that one? Because I know a girl named Vagina…or is it Veronica?

My favorite part is the agreement at the end.

I hereby acknowledge and affirm that I have read and understand The Company’s Non-Harassment Policy, that Hooters forbids harassment of any kind, and that I agree to notify company officials of any harassment complaints which I might have or of any discrimination or harassment by any employee that I become aware of.

Perhaps they should have included the following examples for clarity:

Because the work environment is one of joking and innuendo based on female sex appeal, you may hear and be expected to respond to the following comments:

“Bring your Hooters over here, baby.”

“I need two pitchers of beer, or should I call them jugs?”

At the time of such comments, you may not respond with sarcastic or condescending remarks such as:

“One day, not this day, I will come for you and vengeance will be mine and it will be SWEET!”

“Math is hard. Buy me something pretty.”

All that for a plate of crappy hot wings in a drafty ice house.

NOTE: In case you thought that Hooters was a bastion of all things wholesome and American, check out this story about a Hooters waitress fired because of bruises she received as the result of domestic violence. Hooters didn’t want to give her unemployment benefits saying she “abandoned” her job after being told she couldn’t work until the bruises healed. Way to go Hooters in Davenport, Iowa. Way to go.

4 Replies to “Give Me Some Hot Wings, Hold the Buttocks”