Five Ways the Rockets and Houston Are Alike

The winding story of the Houston Rocketsâ€™ season has rarely made room for logic, linear thinking or any standard notions of cause and effect. Star players disappear, expectations sink and the Rockets surge.

They are confounding and exhilarating all at once. – The New York Times 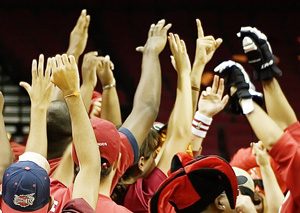 I am an unabashed Houston Rockets fan. I have been since I was just a kid and Calvin Murphy was such a hero of mine, I carried his basketball card around with me in my back pocket.

Like the Rockets, I am unashamed of my love of the city of Houston.

In honor of both and the amazing win yesterday over the Lakers, I give you the five ways the city and the team are alike.

The Rockets play some of the stingiest help defense in the NBA. They also willingly move the ball to find the open man. Ron Artest, their best player now that Yao Ming is out, had a bad shooting game yesterday, but piled up six assists. Even their bench spends most of their time standing. They are the quintessential team, banding together no matter what the circumstances and realizing that what is good for the whole is good for the individual, not the other way around.

The city of Houston gives and gives and gives. When Katrina hit, Houston opened its doors without question or regret for the people of New Orleans. When most of the country forgot that we had a hurricane last year, we sucked it up and went to help our neighbors in Galveston when no one else would. I once read that Houston represents one percent of the population of the United States, but totals nearly 11 percent of its volunteer hours. When you need help, Houston is there.

Neither pretend to be something they aren’t.

The Rockets don’t try to outscore opponents because that isn’t their game. They don’t run up and down the floor with a fast-paced, wild and free offensive game. They don’t gamble on defense. They don’t try to be better athletes. They play smart and hard and they play their game with no apologies. They never allow another team to out work them and they remain true to their approach through the most difficult of circumstances.

Houston isn’t scenic like San Francisco or glamorous like New York and our weather isn’t perpetually perfect like San Diego. But, we love who we are – a friendly, opportunity-driven, quirky, southern city with great food and a giant heart. We aren’t a tourist destination and don’t want to be. You come here for the people not the views and you come here to live not to visit a theme park. We are who we are and that’s just fine with us.

They both defy the odds and the critics.

The above quote from the NYT about the Rockets’ season is absolutely accurate. They began the season with high hopes of a long run deep into the playoffs, perhaps even to the title. They lost Tracy McGrady halfway through the season, traded away their starting point guard in favor of two youngsters and lost Yao Ming to yet another foot injury. The Houston Chronicle’s Richard Justice even penned a eulogy for them in his blog saying, “They’ll almost certainly play their final home game of the season Sunday afternoon against the Lakers.”

But, that’s the thing about these Rockets, like Bruce Willis in Die Hard, they just won’t quit and they won’t go down easy. You have to kill them. No matter what the odds, they seem to constantly come up with ways to win and change whenever necessary to make that happen.

Built on a swamp and false promises from the Allen Brothers, most people didn’t think Houston would survive. But, we scratched and clawed our way up through oil boom and bust, dot com success and failure. We turned a muddy ass ditch into the second largest port in the US. We built the first indoor sports stadium with “fake” grass when people said we were crazy to try. Hell, for all the crap we take about our strip malls, humidity and flooding, “Houston” was the first word spoken from the surface of the moon!

Like any great city, we re-invent ourselves while staying true to our nature, but unlike most cities, we always manage to do it with a smile on our faces and a wink that says, “We’re pretty freaking awesome, aren’t we?”

Neither back down from a challenge.

Shane Battier had to call out to an official because the gash above his forehead was bleeding profusely and pouring blood down his face. A few stitches later, he was back in the game facing off against perhaps the game’s best player. Yao took a hard shot to his knee – the same knee that had required surgery – and refused to go to the locker room, finishing off the game and the Lakers in game 1 of the playoffs.

Ron Artest, having taken an elbow to the throat, made sure to tell superstar Kobe Bryant he wasn’t backing off much the way Luis Scola got in the face of Lakers players when they didn’t like his hard play. The Lakers are, arguably, the best team in the NBA and the Rockets have stared them down at every opportunity.

When they lose players, they just re-invent themselves. No T-Mac, no problem. Run the offense through Yao. No Yao, no problem. Run a bunch of screen and rolls with your young guys. Trade your veteran point guard, no problem. Let the youngsters run teams out of the building.

Artest’s motto of “no layups” is perfectly appropriate for a team that refuses to go down without a fight and is intimidated by no one.

In the 1970’s and early 80’s, Houston was struggling through the decline of the oil industry. At the same time, hordes of people moved into Houston from places like Michigan where jobs were scarce. Did Houston crumble under the weight? Of course not. We converted our blue collar workforce into one of the most powerful white collar energy industries in the world. When Katrina hit and 250,000 of NOLA’s citizens descended on us, many of their most needy becoming permanent residents, did we run out of room or have resource scarcity? Not a chance. We integrated them just like we do every other member of our incredibly diverse city.

We’ve suffered through hurricanes, economic crisis, floods, political scandals and managed to come back each time emerging stronger and better equipped to face the future. In the dictionary next to the word “resilient,” there should be a picture of the Houston skyline.

Just when you think they are dead, they come right back at you. Outside of die hard Rockets fans, who knew that Aaron Brooks and Kyle Lowry could run circles around opponents? Like Charles Barkley joked about Chucky Brown in the mid-90’s, I’m sure that Pao Gasol thought, “This Chuck Hayes guy can’t guard me.” When McGrady went out in February, Von Wafer, a guy other teams threw on the scrap heap, emerged as a young, athletic talent with a silky jump shot.

Whatever happens to this team, they just seem to morph in whatever is necessary to keep them winning. It’s an incredibly endearing and surprising quality in an era dominated by big salaries and often even bigger egos.

I’ve often had people tell me, “When I moved to Houston, I thought it was a horrible place, but the more I lived here and discovered all the great things about it, the more it grew on me.” That’s how this city is. We’re the fourth largest city in America, but few know about it. Anyone who doesn’t get this, just look out your window when you are flying over the city. For a place that is supposedly a concrete jungle, note the massive amount of greenery.

Much like the shock over how many trees we seem to have if you look at it from above, our beauty seems to be hidden in plain sight. Most of what is most exceptional about Houston tends to be what we don’t realize exists or forget about like the Orange Show or the Farmers’ Market or the hike and bike trails along White Oak Bayou or 11th Street Park or Tacos-a-Go-Go. And those are just a few things I I happen to love and come up with off the top of my head. There are a million other things just like that which makes living here such a constant source of the unexpected. I have lived here for 40 years and am STILL finding things I never knew about.

Like the Rockets, Houston isn’t a city of surface, but rather a city of substance, which is why I love both and why millions of others do too.

10 Replies to “Five Ways the Rockets and Houston Are Alike”