It is a black art, and I, Haru, am the blackest of the black. Or rather the great white black art… Blackest… Master. 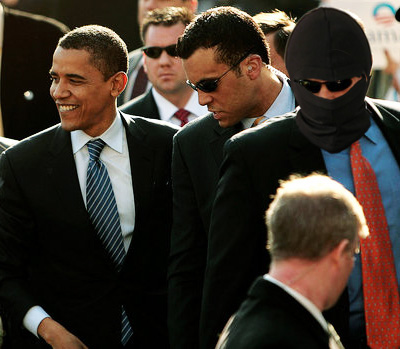 I was watching CNN coverage of the inauguration yesterday and got to wondering something that has frequently vexed me in the past: why are bodyguards, secret service people, etc. required to wear a suit and tie?

You’re probably wondering, “Vexed? Really? You’ve been vexed by this? What do you do all day?” The answer to that question is: think about cake, hurricanes, the abnormally large head of the late Albert Collins, micro cows, sandwiches and ninjas.

That’s not all in one day, mind you. Those examples are probably spread across a month of deep thought or “philosothinking,” just like Socrates, Kierkegaard and Plato. Especially that last guy because I like to eat and his invention of the plate made that a lot easier for me. That’s what you can do with deep brain smarts and stuff.

Through all this mind melding, I’ve figured that secret service agents should be replaced by ninjas. Before you go thinking, “Wow, Jeff, that’s the smartest thing ever,” let me tell you the five reasons why I’m so awesomely smart and deserving of the nobel prize for kung fu, which they totally have.

Ninjas are dressed better for throwing down.

Let’s be honest. When a guy needs to get his fight on, he doesn’t want to be dressed in a suit an tie. Not only is ninja gear far more intimidating, but it’s just easier to move around in. There’s no way some suit wearing dude is going to be climbing walls and laying down the kung fu in a tie and a sports coat. Hell, a track suit or shorts and a t-shirt would be a LOT better for bitch slapping some lowlife. Also, ninja gear better conceals weaponry. What can you keep in a suit? A pistol? Pfft. Try 20 stars, nunchucks, a sword, smoke bombs…and that doesn’t even count those spikes on their hands and feet.

Speaking of gear, hoods are so much more effective for headgear than sunglasses. First, they are just safer. Some jackweed punches you in the face with glasses on, you could lose an eye. Second, without the glasses, criminals can see the look of death in your eyes and think twice about an attack. Finally, who the hell knows what the guy looks like under the hood? He could be some snaggle-toothed inbred who isn’t just going to kill you, he’s going to ass rape you in the woods like you’re Ned Beatty. If that doesn’t scare you, nothing will.

Ninja mind control is the first line of defense.

I know some of you are thinking, “But, Jeff, those guys in suits are there to LOOK scary to keep criminals from messing with the prez. The bad ass swat snipers are on rooftops. Since you can’t SEE ninjas, it might make criminals think that the big guy has been left unguarded.” True, however, you are forgetting about ninja mind control. Like Jedi mind control, they can peer into the minds of criminals before they attack and make them think of puppies and kittens instead of death and destruction and if that somehow didn’t work (you know, like if the criminal was Jabba the Hut), their stealthiness would take the bad guys by surprise like a coordinated raptor attack you didn’t even see coming.

I’m not saying that your average secret service dude isn’t athletic. I have no doubt they have skills. But, seriously, can they like leap seven feet in the air straight up? It’s not like they are recruiting Labron James. And you think bullets are only fired from ground level. Think again, Columbo. If someone fires a shot at the president from a window or a ladder or while hovering in mid air on a silver surfboard, you want a NINJA there guarding him, not some beefcake in a suit.

I’m thinking they could have different levels of ninja around the president. The level closest to him could be in something that makes them visible – maybe they dress in fuschia or mauve instead of black revealing them to the general public. You think some average looking business guy in a suit is scarier than a fucking purple ninja?

I rest my case.

I believe, as his first act in office, Obama should require at least some ninjas be recruited into the secret service. If the White House can be integrated, so can the secret service. For too long, ninjas have suffered in sweet, deadly silence over the inequitable hiring practices in the nation’s most storied bodyguard service. On this historic day, when a black man can take the oath of office, black suited assassins should be allowed to protect him.

← Worthless Things About Me You Can Use for Trivial Pursuit, the Jeff Balke Edition
Hell Yeah, We Did! →